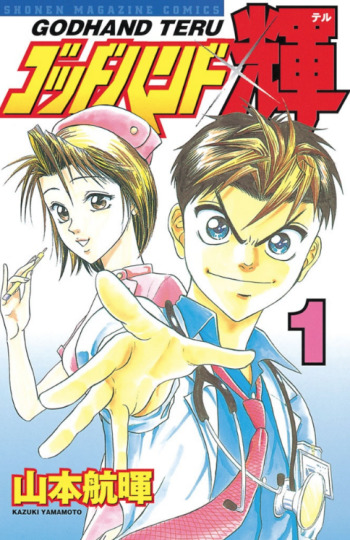 Saijou Mikoto was born with a bad heart. It was thanks to the incredible skills of Japanese leading pediatric heart surgeon, Shindou Mamoru, that he survived into adolescence, and he's decided to show his gratitude by becoming the greatest pediatric surgeon the world has ever known.

Doctor K is a doctor with exceptional skill. Graduated from a top-tier, high profile medical college, instead of working in a hospital or running his own clinic, he prefers to live his life wandering around to treat people in needs of help.

For Shinonome Keisuke, high-school student Kotone Tasuku is the only person in the world whom he can communicate with. Once a brilliant surgeon, Shinonome passes away at a young age, only to wander the world as a ghost, a ghost that only Tasuku can see and talk to. When an accident leaves Tasuku’s hot childhood friend Takeuchi Mai’s younger brother severely injured, the only way that he can survive is if Shinonome and Tasuku work together to become the most unusual and possibly talented pair of emergency surgeons the country has ever seen!

Asaka, the prison's nurse, is leaving her post to her gorgeous granddaughter Yuki, who will bring a lot of troubles and chaos in the life of the people around her, starting with detective Tatsumi, her childhood friend and now her neighbor.

Dr. Black Jack's ingenuity and skills are once again called upon and put to the test: a starlet who has built her life around a secret; a tortured artist who has lost his muse; a pro-fighter whose compassion is his handicap; and a disfigured man whose face has corrupted his soul. As he takes on cases that will push the limits of medical science, only he can create the miracles necessary to save his patients.