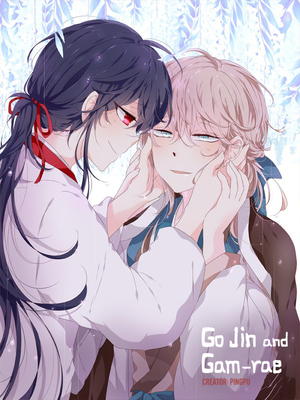 Once young friends, Haebom and Taesung have grown distant after tragedy brought them under one roof as family almost 10 years ago. Things get more complicated in their last year of high school as now they’re... classmates too?!

The art style is pretty calming in both, the characters spend some time developing feelings and they are just overall pretty similar but with different plots and a different time.

The Chart of Priest

When the hero Cliff defeats the evil Demon King, he's left with an unwanted parting gift: a devastating curse that viciously attacks his body and mind. For many years priests, healers, and even Cliff's powerful dragon companions have tried to relieve him of this affliction, but none have succeeded. When the young priest Edward Granche is involved in an unfortunate incident that causes him to be removed from the Holy City and assigned to a remote post in the countryside, he meets the pained, prematurely-aged Cliff and is determined to help him. In his mission to relieve the veteran hero of his suffering, the two men begin falling in love.

Both take place in a fantasy world, featuring young men who fall deeply in love with a strong but gentle older partner.

Our story begins with Jigyo, the crown prince, having recently been exiled from the palace with a guard, Dangeum, and the man who raised him, Chunggeum. The three are forced to pass their remaining days in a quiet village made up of mostly elderly residents. This leads to a listless and lonely Jigyo, who begins pressing Dangeum to relieve his traditional post as a voiceless shadow, and the two quickly grow closer. Hints of a bloody conspiracy, Dangeum’s mysterious origin, and a Chunggeum who seems to know more than he's letting on - just how are these three characters connected, and what will happen to them during exile?

Both by the same webtoon artist, these two fantasy boys-love stories have a similar feel and the same gorgeous art style.

A high school boy whose heart doesn't beat meets the man that stirs up his heart.

The second season of Paramour.

Papa Is a Bride?

A manhwa about a single father who doesn't know how to take care of his young daughter. In front of a supermarket, the father and daughter run into another man buying dolls, who could be a pervert? But this new man is good at understanding a young girls' minds?! What will develop between the two handsome men? Will her father really become a bride?