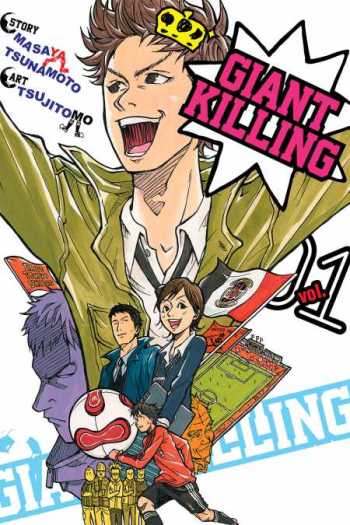 Once a baseball player for Saitama High, Keisuke Hatogaya now lives his adult life as a successful, manipulative salesman – that is, until he's framed by his boss, betrayed by his girlfriend, and thrown in jail. But things turn around for Keisuke when he's visited by the coach-turned-principal of Saitama High. In exchange for bailing him out, Keisuke must coach the poorly-performing team and bring them to Koshien within a year, else the team will lose its funding and be shut down. With his unorthodox methods, can Keisuke lead the boys to victory?

Two baseball manga about an unorthodox coach who's asked to train a team of misfits and bring them to glory - both are quite long-running as well, and will likely hold your interest if you liked one or the other.

While not about the same sport and taking place in a different setting, both Kuroko no Basket and Giant Killing star a very unorthodox character who is underestimated by the sports team. beyond that, they're fairly typical sports titles, with arcs pertaining to battling a specific team-of-the-week and a a general desire to make it to a championship.

During his last spring break before starting high school, Tsukushi Tsukamoto meets Jin Kazama, who invites him to a pick-up soccer game. Their chance meeting, and his first-ever experience with soccer, move kind-hearted, timid Tsukushi to enroll in his new high school's soccer club, which is among the strongest in all of Japan. Unbeknownst to the rest of the world, there's something amazing hidden inside Tsukushi's heart … and through his trials and tribulations in the soccer club, it's beginning to blossom!

Days mainly displays to the viewers the points of view and motivations of players of an elite school while also showcasing the characters' growth throughout their soccer competition. The manga's Coach Nakazawa aka "coach Whiskers", even if only a minor character, also provided quite substancial comments and guidance for the players. Meanwhile, Giant Killing focuses on the coach's ability and how his expertise could help bring out a failing team's potential. His credibility and experience also helped his pllayers regain their conpetitive spirit as they strive to prove their power as the competition's underdogs.

At first glance they are not similar, with only the sport as a common factor... or perhaps even their comedic factor (which have been greatly reduced in the anime adaptation). However, reading the characters' lines from both manga would show you how deep their stories really are.

After the World Youth, Japanese players are looking for pro careers in Japan and around the world.In order to fulfill their dream of World Cup 2002 in Korea and Japan, they must get stronger playing in various club competitions, home and abroad.

Taking place after the Captain Tsubasa manga and before the manga World Youth. Tsubasa isn't in Japan anymore, the High school national championship is ending, and Japan's players will make three friendly matchs against the Hollanda Youth.

Ryuu Ichijou, a boy who dreams of joining Japan's national soccer team. Ryuu is called a genius soccer player, and his aspirations seem within his reach, but when he is in elementary school he gets hit by a car while protecting his friend, and must face two years of grueling rehabilitation...