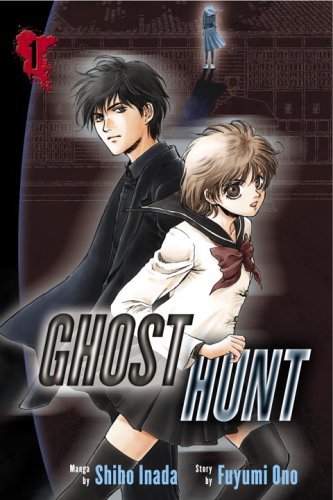 After becoming a fan of the show, I thought I should check out the manga and as I read, I wasn’t disappointed. The manga and the anime practically start out the same way, though the manga seemed to have a bit more depth to the characters and stories. Sadly though, 10 of the 12 volumes were extremely close to the anime with only a few exceptions. Only the last two were not in the anime which makes me wonder just what they were trying to do. There are two possibilities to the reason why this is, the first is that they wanted people to read the manga so did not finish the anime and then the second is the one that I think happened, that they ran out of time or money to create the last few episodes. I do suggest though that you do read the manga and maybe even before watching the show because of the fact of only two of the books not being animated.

When we start talking about characters, we have an interesting mix. John Brown is the Exorcist within the church. It’s surprising because he’s only 19 years old and is already ranked higher then a priest. In the anime though, I believe they had said that you have to be ordained as a priest for it to happen. Anyway, the manga has a bit more fun with his character because he’s a foreigner from Australia. This gets into the mindset of Japanese when they see foreigners. When someone speaks really formal or uses a different dialect, they may make fun of that person. John started by talking in a Kyoto dialect when the others asked him not to be so formal. I understand why people wouldn’t get it (hell, I didn’t get it at first either) but it gave a bit more insight to his character. Then there is Masako who is a famous spirit medium with a lot of knowledge under her belt on the spiritual realm. She is kind hearted for the most part but then can also be rather snippety and crude though still keeping her lady-like manner (mostly).

Ayako is a 23 year old shinto priestess who is rather wealthy because she is the daughter of a doctor. She is rather confident and proud though I never actually saw her do much when it came to expelling spirits even though there was at least one occasion that she did. The rest of the time, she seemed to act more like a mother to the group then a priestess. Takigawa is a monk/musician who pretty much acts like a mix of a father figure and an uncle to the group of younger characters. Again, there was not much about him doing stuff in the spiritual acts besides creating barriers and once in a while dispelling evil. He does do a lot more then Ayako though. Then we have Lin and Naru who we really don’t really know much about except they are rather silent most of the time or bossy. And then Mai who might be one of my favorite characters of the manga even though she is a bit clueless. I liked her because it gave the characters a reason to explain what was going on for the reader. If we didn’t have that, them explaining would seem forced.

The artwork is pretty ok though some of the characters really don’t look right. At first, I didn’t like the design of the girls but Mai’s design sort of grew on me. She looks much different then the anime though and so don’t be surprised if you don’t recognize her. I still do not like Masako Hara’s though as she seems way too dolled up compared to the others. The men have pretty much kept the style from the show (Well, from manga to anime actually) and yet Naru seems to show much more emotion then the anime and is a little more realistic. Sadly, the ghostly happenings seem to be lack luster or hard to see and many times the pages are pretty much all white making it hard to understand what is going on. That is the problem with only having white and black ink to show what is going on.

At first instance looking for a scary manga, I tripped with this story. Horror and gore readers are recommended to skip this manga, which although it has an interesting and nice story it doesn't achieve the feeling of horror but it's more oriented to a supernatural story.

The story focuses on Mai, a good spirited common student which by coincidence or destiny meets a paranormal investigator, which she calls Naru. Seeing potential on her, Naru hires her to work with him and his assistant Lin, into paranormal cases. There she will learn about the entire paranormal world and the people that are called experts on the area.

The situations are quite simple and the cases are well directed. The information on paranormal studies are quite interesting but destroys certain aspect on a basic horror manga. One thing that can create the creepy atmosphere on the stories is the unknown and this manga totally destroys it with all the information given by medium, monks, researchers and priests. Even on scenes where the ghosts are attacking, one feels the easiness that Mai will know what to do, since she was instructed by an expert on the matter.

[SPOILER] One other thing that unpleased me was Naru's attitude and personal grow. The character didn't mature and the story of his brother Eugene, rather than turn into an interesting twist for the story, it finishes as a crappy romance fail. Great to know... that now Mai is Necrophiliac, since she has feelings for the dead. [SPOILER]

Others than Naru, is interesting to see a more humanistic side on the paranormal experts, which always are perceived as honorable, lunatic or preachers. Here we relate with a monk who works more as a musician, a bad mouthed shinto priestess, a spoiled medium and a young and innocent priest. Funny thing, the adults are less trustable and commit more mistakes than the young ones. Even so, characters are quite light and lovable.

Inada Shiho seems to have only done this manga and the sequel "Akumu no Sumu IE". The drawings are quite cute which is perfect for the normal scenes. The problem comes with the horror scenes, that even if includes blood and vicious creatures, the drawing doesn't help to create the spooky atmosphere. It's like a quite common horror house, where you can tell everything is fake.

Overall the story lacks on some important points for a horror story. But if you're interested on paranormal activity on real life, it could be interesting for you. Personally I'll read the next one.