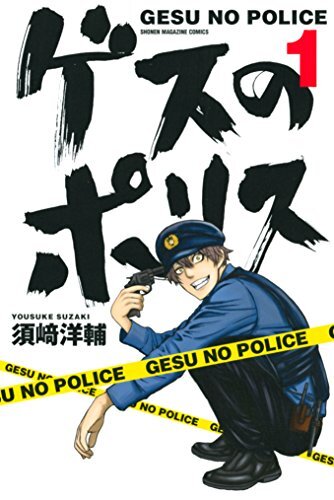 A manga which follows the lives and experiences of a couple of female police officers.

A cute, fun spin-off of Fairy Tail! The Magic Police can handle any case! A heartwarming police story!! The members of Fairy Tail are now police officers! Rookie cop Lucy has just been assigned to Team Fairy Tail, a special unit of the Magnolia Police Department. Together with its completely over-the-top members, including Natsu, she'll protect Fiore City from wrongdoers like motorcycle gangs, stalkers, bank robbers, and masked thieves!! The curtain rises on a Magic Police story featuring the all-star cast of Fairy Tail!

Haruki Anjou, a policeman in the quiet town Nagashima, would rather spend his days slacking off and reading dirty magazines than enforcing the law. So when he receives news that a young, busty rookie from Tokyo is transferring under him, the perpetually single pervert thinks it’s a dream come true! There’s just one catch: she’s Kiruko Otonashi, an ex-mercenary with a gung-ho mindset and a penchant for destroying the neighborhood in the line of duty! Now Nagashima’s streets are anything but calm, and as Kiruko’s senior, it’s up to Haruki to rein her in, lest he lose his job!

In the town with a lighthouse, Inuhouzaki, the police patrol division's new recruit Kurumi, and the talking middle-aged police-car-dog No.1 are on the case. Everyday, they somewhat protect the peace of Inuhouzaki, but is it okay to leave it up to this rambunctious duo?

Riki has been reassigned to a different department in the police department. Riki, disliking paperwork, is glad to hear that he doesn't have to do any paperwork since his new assignment is to test drive a new vehicle secretly invented within the department. The new vehicle, however is beyond Riki's imagination; a talking car covered with a mascot girl on all sides. The car is a "Patrol Car with Artificial Intelligence & Technical Illustration" named Pattie 2000 and it talks like a human. A car that can talk, react to situations quickly, and has all sorts of technological advancements such as maps appearing on glass... and it can transform into a girl!?!? Technology is grand, isn't it?