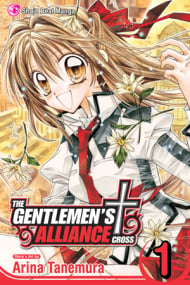 Haine Otomiya is a student at the elite Imperial Academy. A one-time gang member who was put up for adoption by her father, her life changed when she met Shizumasa Togu, president of the student council and ‘emperor' of Imperial Academy. Haine quits her gang and enrolls at the prestigious private school in the hope of winning Shizumasa's love. When she is hired as his school bodyguard, she's thrilled; but can she survive the drama of the student council? As secrets spill and relationships form, Haine is pulled further into the world of the elite and powerful, where wealth is everything and social status is the basis of all relationships. What's a girl to do?

I'll come right out and say it, I'm a hopeless romantic so I love to read shojo romance stories. That said, this manga had been on my "To Read" list since 2008? I just never had time to get around to it. I enjoyed it, for the most part, but a lot of it just plain irritated me, as I will describe below. -After writing this review, I realized that it sounds like I hated this manga more than I liked it. I liked it enough to finish it four days after starting it, but that does not excuse the quality of the story- Story: Haine dedicates her life and love to a boy who drew a picture book that was given to her. This boy, presumably Shizumasa Touguu is the 'emperor' at the elite highschool they attend (meaning he is the student president). But the acting emperor at the school is [SPOILER] none other than Shizumasa's twin brother, Takanari. [/SPOILER]. I have several issues with the story, namely these: 1) Almost every side character is a straight up homosexual/cross-dresser. I have no problem with homosexuality, and I am not a homophobe, but I am reading a shoujo manga, not yaoi or yuri romance, so it irks me when that kind of stuff becomes the main focus of the story...mainly because I can't necessarily relate to it. Additionally, this it does nothing to further the romance of the main two characters, which is flimsy at best. 2) Much of Haine's self-esteem issues come from the fact that her father is just a straight up jerk. Sure, you find out later in the story that he put her up for foster care because he didn't want to "tie her down the same way he tied down her mother" but that's a really lame reason to give up your daughter, [SPOILER] even if she's not your kid. [/SPOILER] 2a) The story behind her mother losing her memory and therefore forgetting all about her? Don't buy it. Nothing was traumatic enough for that to happen, and it felt like it was forced. 3) Haine strikes the reader as your typical shoujo girl, strong and bullheaded. But breaks down into tears when someone calls her Platinum at the school dance with Shizumasa. There's a little too much focus on what everyone else thinks about everything. I.E. The Media club digs into her past, people call her Haine-sama and Platinum and treat her differently, worrying about her crappy fathers approval. You would think that after awhile she would just say "F*** it, I don't care what you think.", and grow a pair; especially since she used to be a gang member, but she doesn't. 4) The ending. The ending stank on ice. [SPOILER] She marries Takanari, and she and Takanari live in a house with Shizumasa so they can all be together [/SPOILER] ...WTF!?! Takanari and Shizumasa also patch up their relationship much to easily, especially for all the abuse that Shizumasa put Takanari through. The ending really was not very good. 5) The whole archaic mentality behind the twins and a shadow...did not feel that this was strong enough to be the underlying problem that the main couple would have to overcome...frankly, it was stupid. Aside from these points, it was your average girl-meets-boy, girl is special/goofy/stubborn and boy falls in love with her. I just felt the plot was too rushed and the circumstances surrounding events that happen are just wayyy too unrealistic. Haine is in love with this guy from the get go, and you don't really get to watch their relationship grow at a normal pace. ART: Tanemura is talented, but many of her characters in this manga looked the same and at times, it was hard to differentiate who's who. I like her art style, but I'm not particularly a fan of the super-huge anime eyes, they're a bit of a turn off. -- All and all, I was looking for a nice cinderella story. But having read others like Imadoki!, Boys Over Flowers, Tail of the Moon, etc. it felt like this story was missing critical relationship development and that the ending resolved everything much too easily. I also didn't like that everyone, and I mean everyone, was totally enthralled and in love with the main character.

I'm sorry, but Haine pissed me the heck off. I didn't like her and had some issues with other characters as well. It sucks because I bought majority of this series with some of the birthday money I got (This was back when Borders was still around) but in the end, I just didn't care about the characters or the story.  What I did really appreciate was the LGBTQ rep. It's sooo nice to see LGBTQ characters outside of LGBTQ genres because, hello, these kinds of people exist and shouldn't only get attention in genres like yaoi and yuri. They deserve to be represented in all the other genres out there like heterosexual people. Overall, artwork is beautiful, Maora & Maguri were my favs, hated Ushio & Senri's relationship, hated the main character, and the story I didn't care about :/ P.S. The side stories dealing with Haine's little bro and his romance journey was cute <3

Story: In a nutshell, this is the story of a girl called Haine, who ends up caught in a love triangle between two guys who look exactly the same. But its better than that, the story is a bit slow moving at the start, but it soon speeds up and improvements are made. I really can't flaw the general story of this, except for the ending, the ending was what lowered its rating because it was one of the worst results of a love triangle that I can ever imagine, and how BOTH boys can be even just satisfied with the ending for them I really don't know. I won't say HOW it ends, but Jesus, I sure didn't see it coming and found it very stupid that such a thing should happen. But other than the very, very end the rest of the story certainly is good. Art: Typical of Arina Tanemura, the art is magnificent, only making me wish I could draw such amazing pictures. Yes, the eyes are amazingly huge and out of proportion, but beyond that its great! Characters: I liked most of the characters in Shinshi Doumei Cross, they were sweet. Even the ones with the lost identities and crossdressing issues. The character development was also very good, especially for characters such as Ushio and Haine herself. The fact that the 2 main guys looked exactly alike irritated me a bit, I could never tell which one was talking when it was clear you needed to know to understand all parts of the story, but thats the only flaw. Overall: Although at first slow, and at the end a dissappontment, its still a very good manga and one of Arina Tanemura's best works along with the likes of Full Moon Wo Sagashite and Kamikaze Kaitou Jeanne. If you're a girl then you'll probably like this story :)