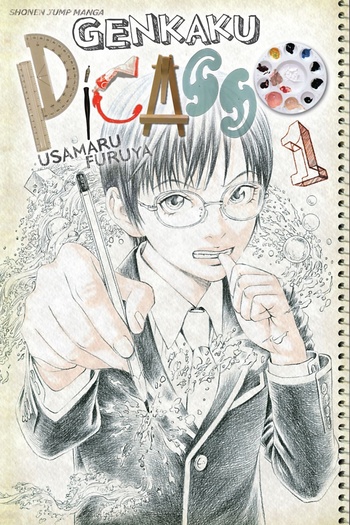 Lots of similarity in these two manga: a boy gains special powers and must use them to (reluctantly) help those around him, with the help of a cute female sidekick. In both, resolving situations revolves around figuring out the truth of what is in someone's heart.

Both center heavily on the themes of death and helping others. While KCDS is much more grim in places, both series have a comedic streak and can be very heartwarming at times. If you enjoyed one there's a good chance you'll enjoy the other

Alice Seno is a plain and ordinary fifteen-year-old girl, and that's exactly her problem. Perpetually overshadowed by her beautiful and popular older sister Mayura, Alice grows to resent her sister for being so perfect. But when Alice finds a rabbit while crossing the street one day, things change forever. The rabbit turns out to be a magical scout named Nyozeka who claims that Alice is a Lotis Master - a person capable of harnessing the power of words to enter people's hearts and dispel the darkness within. However, Alice accidentally uses this new power on Mayura, and she vanishes. Now, Alice must join forces with her handsome upperclassman Kyou and Lotis Master Frey to rescue Mayura and rid the world of the dark power of the Maram Words.

Genkaku Picasso is WAY better, but both titles follow a protagonist who has the powers to enter people's dark thoughts and change them for the better.

The protagonists of Homunculus and Genkaku Picasso both have the ability to see others' true thoughts/selves, and use this ability to help people deal with past trauma and other difficulties.

Genkaku Picasso is a bit like Homunculus-light: the former is much less graphic and usually doesn't deal with quite as heavy themes. However, even though Picasso ran in Shounen Jump, it was written by noted seinen mangaka Usamaru Furuya, so seinen fans will find plenty to love in it.

The Secret Notes of Lady Kanoko

Although she doesn't get along with people very well, Lady Kanoko considers herself a perfect 'observer.' Her hobby is observing the students in her high school class and keeping a journal of the classroom drama. But what will happen when Kanoko becomes more than the observer, and directly involved with some of her classmates?

Another mostly-episodic manga about a high school loner (by choice). Genkaku Picasso's Hikari cares more about his art than any person, and the titular Kanoko loves researching and observing her classmates, but would rather not interact with any of them. However, something always goes wrong and the two begrudgingly go about righting other people's personal problems with their unique gifts (of art and observation, respectively).

Both are well-written, with charming characters and interesting situations. Definitely recommended.

The stories all revolve around the common troubles that teenagers go through, whether it be falling out with a friend, being bullied, or dieting.

This is another semi-episodic manga by Usamaru Furuya about the problems of high school students. Genkaku Picasso is a bit more realistic/relatable, but both display a similar blend of character drama and surreal artwork.

In Gakuban Prefectural High School, there's a boy who just might be the coolest human being alive - a first-year student with style and finesse that solves every problem with ease, and looks absolutely fabulous in the process. Women adore him, children idolize him, and delinquents are frustrated by their inability to defeat him. The teachers can't outwit him, and when there's an animal in trouble, even the raging winds can't hold him back! Whether he's thwarting bullies, sword fighting with an angry bee, or eluding the unwanted attentions of a smitten middle-aged lady, he will always succeed and he will always look unimaginably cool while doing it. Haven't you heard? He's Sakamoto!

Both manga have a main character with special powers that sets him apart from his peers, and they use that power to help people or solve tricky situations. Sakamoto has more comedy and Genkaku Picasso has a lot of focus on psychology they're both pretty episodic and feature a lot of odd school antics with rather odd male leads.

In the city named Kotobuki, there are rumors of a man who defeats bad people, leaving only giant, beautiful graffiti at the scene. Since no one has ever seen that man in person, they called him "Spray King." Kuroda Miu, a photography student in an art academy and part-time photographer for a weekly magazine, wants to catch Spray King on film in order to create a good scoop for the magazine. One day, she met with Tanaka Torateru, a boy who just entered the academy, but who wasn't that good in art. How could the meeting of the two lead to the "truth" about the city they live in and about the hero in the shadows named Spray King?

Yukino Tachibana is a calligraphy prodigy. At the tender age of 16 she is already one of Japan's most exciting young artists. She is so popular at her new high school that she has earned the appellation of 'The School Madonna'. As artful her brushstrokes, the real Yukino Tachibana is in reality, apart from her calligraphy genius, completely useless, rude, and possessing of a distinctly inflated sense of self-worth. There is only one classmate who fails to be fooled by her facade: Tarou Nakamura. Nakamura is much more interested in his crush, Amano-san. But this indifference might prove to be his downfall, as circumstances cause Yukino to set her eyes on him....This boy is burdened with a task to keep Yukino's true nature a secret from the rest of the school, while trying to win the heart of his sweetheart.

An Even More Beautiful Lie

Painter Yukari Yohito will soon realize that despite all that he’s been through, leaving his umbrella on a train will be the one thing that changes his life. Completely in tune with his paintings, Yukari is a genius at the canvas; however he is completely useless at living life. One day fellow art student Kurosu Keiichiro realizes Yukari has forgotten his umbrella on the train and quickly tries to return it-- having been a huge fan of Yukari’s work, he strikes up a friendship. Keiichiro begins coming by to take care of things for the neurotic artist. However, the more he involves himself in Yukari's complex life the deeper Keiichiro's feelings begin to run. It's no longer mere friendship or even admiration that moves him, but just what should he do about it?