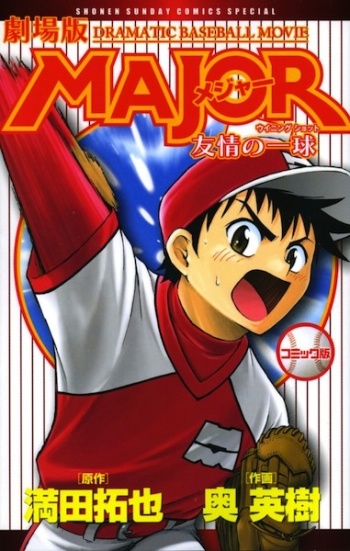 If you're looking for anime similar to Gekijouban Major: Yuujou no Winning Shot, you might like these titles.

Due to sickness, the coach position of the Meisei High School baseball team is handed to Eijiro Kashiwaba. He is a ruthless man who forces the team to enter a Spartan training procedure. Tatsuya and Minami slowly discover stories about his past and wonder what his true intentions are.

Tatsuya and Minami meet Akio Nitta, an ace batter who thought of Kazuya as his rival. Nitta sees great potential in Tatsuya and expects to face him on the road to the national high school baseball tournament.

Tatsuya moves to America and pitches for a poor, struggling minor league baseball team called the Emeralds. Meanwhile, Minami is still in Japan, trying to find her own path after quitting gymnastics. Inspired by a photograph of her final performance, she becomes the photographer's assistant.

Goro is determined to help the Indiana Hornets win the World Series against the Texas Raiders. In Game 6 a ball flies at his head, a ball similar to the same shot that killed his dad, from Gibson Junior. The Hornets go on to lose Game 6, setting up a decisive Game 7. Goro must try to convince his coach and his teammates that he can play despite the risk of a concussion. At the same time Shigeno goes into labor with her and Goro's first child, a little baby girl. Shigeno hides this information from Goro hoping he can play in Game 7 and become the best in the world, but the rest of her family questions the decision, knowing Goro's stubborn streak.

Having flown high in the Major Leagues for many years, Goro is suddenly struck with an injury that destroys his pitching arm. Life has always thrown him curveballs, but this time there’s more at stake than just fame and glory – namely, the respect of Goro's kids and their love of baseball. With the hopes of his family weighing on his shoulders and memories of his dead father clearer than ever in his mind, Goro decides on an unusual route back into professional baseball. But is he right to push for an unlikely dream when it compromises his fatherhood, or should Japan’s greatest pitcher admit defeat and finally hang up his glove?

Goro is back in Japan; awaiting him are old friends, new enemies, and the opportunity of a lifetime. He finds out just in time about a selection process for the Japan Representatives, a team of all the best Japanese players who will face America in the baseball world cup. In an even more tempting twist, Joe Gibson will be in the American team. For Goro, this is the first chance to represent Japan on the world stage… and his last to take on Joe Gibson in an ultimate showdown!

Goro’s sporting adventures continue, only this time he is in the land where baseball was born – America! Not only are his opponents bigger, tougher, and more determined than ever before, but even his teammates are ultimately competitors in the grueling race for the Major Leagues. Add to that the culture shock and language barriers and it is clear he has his work cut out for him. Still, Goro has never been closer to his dream of the Major Leagues and, as far as he is concerned, the bigger the challenge, the sweeter the victory!

Having turned down a place as Kaido’s ace, Egashira Edawara, Kaido’s agent, still hasn’t forgiven Goro, and his dirty politics deal our hero a devastating blow! Refused entry into every school with a baseball team, Goro joins Seishuu High where baseball has no place and the girls outnumber the boys 452 to 38. Never one to balk at a challenge, Goro decides to set up a new team of his own to use to defeat Kaido; but first he must persuade the few unwilling boys at his disposal to join him before even thinking about how he will train them up to be good enough. Things at home aren’t easy either as his father struggles with the last days of his baseball career. As Goro enters the grown-up world of baseball where being an ace alone is of little use, he must learn to take responsibility not just for his own training but for those of the entire team...