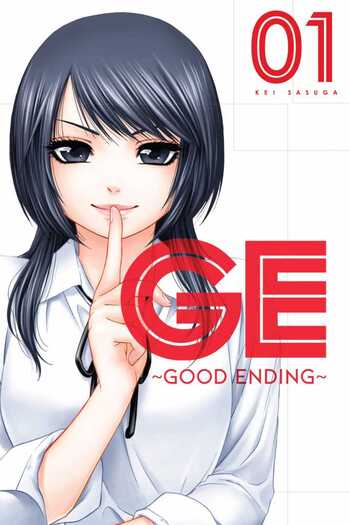 Seiji Utsumi is a wholly unathletic boy who is infatuated with Iketani, a bubbly and pretty girl in the school’s tennis club. Unfortunately, while he knows exactly how to get the result he wants in dating sim games, he has no intention of attempting to approach his real-life crush and is simply satisfied to admire her from afar. One day, however, the new beauty in his class, Yuki, learns of Seiji’s affections for her senior in the club and takes it upon herself to help him in his romance - and the first step is to get him to join the tennis club! Now Yuki is coaching the lovestruck teen in how to win his love, but are her intentions true, and will Utsumi be able to get the “Good Ending” he desires?

Warning: contains spoilers -> Don't read if you don't have to. From the beginning i got hooked into the story. I was in the mood for some lovey-dovey manga, and this one seemed the right one! So much happening between the characters and so much misunderstanding. One thing is for sure, the love is real here. There were some moments i just didn't want to continue because i was afraid of what will happen next. I felt their pain and emotion in a realistic way and it was overall such a sweet connection between them.Unfortunately there is a but(t). It says Good Ending, and certainly this is what you will receive. Though, you won't feel the chemistry of love by then. Why? Because it's simply rushed. So much is happening in the last couple of chapters. And not even rushed in a good way! But rushed in the most cliche way i can imagine for a love story. I mean it's like the first 120 chapters were like good passionate sex, and then the last 36 chapters were like 3 minute porn videos.We get an amazing build up for Tooru. So amazing that you even get afraid the moment he appears in the manga. Afraid that he will destroy everything Seiji and Yuki have. But then suddenly abduction? Seriously? And then Seiji becomes the knight in shining armor. Wait there is more! He even climbs down her window to runaway together!! Oh Kei Sasuga, you didnt...This is the type of hollywood-romance-cliche ending that i DO NOT want to read. This could've gone into a way more heartwrenching ending which will also satisfy you. I finished this at 4 o'clock nighttime, i sacrificed sleep so i can finish this. And it was not worth it. The next day i woke up like shit because of this.I'am happy for you Seiji that you got a Good Ending, but i did not.

Good Ending certainly has a good story but contrary to it's name, does not have a good ending. The story is amazing, heart wrenching, and tear jerking, I found myself many times with  my eyes watering at this realistic(kind of) love story. I absolutely loved it, the characters were well portrayed and each one had a unique story. The art though was a little bit odd for me as I usually select my manga reads based on the initial art (admittedly). I think this story is a must read if you can get past the terribly rushed ending. It is almost as though the manga was axed and had to be wrapped up in a chapter or 2. It was going so well, finally overcoming the single obstacle that had been there for like 35 chapters (which was admittedly trying my patience) I thought the story was finally going to go somewhere. Well boy was I right, it hops right into it, rushing all the way to the end in the span of 3 chapters, the final 2 chapters covered so much content in so few pages they could've easily made 20-30 more chapters out of it. Either way, they must've caught wind of the story getting dry and stale like Kimi no Iru Machi and decided to play it safe. You'll fall head over heels for this manga if you like a good story, but you'll bash your brain out on the table at the stupidity of some of the characters (like all good stories).

Good ending This manga tells the story of a young guy named Utsumi. Like one can already guess the story is following the usual highschool setting. Utsumi is just another "loser" who only can gather his courage to watch the girl who he crush on from afar, while doing so he encounters a girl who found out about his crush. The girl tries to make him confess and at the same time tries to find the hope, that love in this world is not something that just leads to pain and suffering, she tries to fix the wounds of her heart while helping Utsumi. Story of the manga was well told and progress of it was somewhat fine, it didn't feel like author tried to rush things or suddenly slow it down. The ending felt a bit rushed, it could have been few more chapters longer, but the idea of it was easily graspable.  At the very beggining I thought that the story is going to be about this useless shy kid, but as I decided to keep on reading I realised, that main characters change, some more some less, but they do, they are not as they were in begining. I felt delighted that this manga wasn't all about how shy one is and how holding hands is already the most embarrassing thing in the world. GE wasn't all about panty shots or peeking, it felt more mature, guys in this manga were not very voyeuristic. While the setting was in school it didn't feel like it was all about school life, the story felt more like a real life experience, it was also about guys being deceitful and what lead them to it. There were some times that I felt like yelling at Utsumi "you jackass, just tell her that, why can't you", but as he developed it happened less and less often. The story includes secrets, memories which are better forgotten and even a trauma. I enjoyed how characters were holding onto their feelings so they wouldn't make the ones they love awkward or make them break up. It truly was an emotional rollercoaster to read GE.  Art had its ups and downs, I really hated when in few chapters Characters had like wallpapers glued to shirts or jeans but sometimes it felt like I am really watching at something beautifull. The important parts of story were always well drawn and placed. There were times when I just enjoyed watching how characters are drawn, but I can't say the same about backgrounds, I felt like they were lacking, while not always, but there surely were times that I simply ignored where they are and only watched emotions of each individual. I guess the changing art really made the manga more enjoyable. Characters, oh such variety of them, starting from the shy boys to tomboy. I really enjoyed reading about different people and their attitude to different situations, the most admirable thing I can say about characters in this manga is that they improve, they are humans and they are the ones who change. It was very pleasing to see them "grow up" and become experienced in multiple ways. While I still think that our main character was too big of a wuss, he really did sometimes things that were uncharacteristic for him, although it happened later on in the story. To conclude, I can say that this manga is something that is going to affect you, but at the same time it won't leave you dissapointed. It truly is a interesting love story and the development of characters is something to not laugh at, while I still disliked that one character was so dishonest with himself/herself, I still admired the actions and keeping emotions under control. 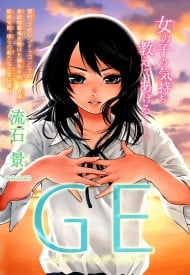