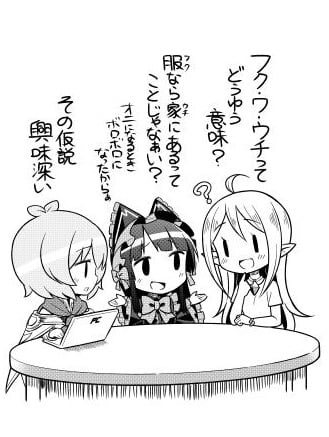 Chisato is a normal high school student. One day she meets a strange girl living alone in an abandoned schoolhouse and becomes her "friend".

In order to become a splendid devil in Hell History, a stubborn and reserved 6 year old, Robin Verall, will be entering Hell Academy elementary. He really hates to go to school so he hides in some weird places, resulting in him "being in a pinch!" Robin's homeroom teacher, Shiba-sensei, discovers him in an odd place and saves him from a pinch, and since then, Robin is feeling a bit more attached to sensei than ever. And goes through some Hellish schemes to tries to get closer.

Fuka Nanase, a 14-year-old in the 8th grade, falls in love for the first time. But when her heart beats, she becomes a witch!?

Eren and Mikasa enter a new school: Titan Junior High! However, Eren's hated Titans for years—can he get along with his new (harmless?) classmates?

Funko, Shigu, Eru and Ichiroku seem to be typical school girls on the surface, but they're actually powerful, dangerous guns that must be treated with care and respect! Together, they attend Seishou Academy, a special place where not only are all of the students guns, the teachers are as well. Alongside their always-in-harm's-way homeroom teacher and other classmates such as Jiisuri, Ichiyon and Faru, the girls will live a very eventful school life full of shootouts and special training.