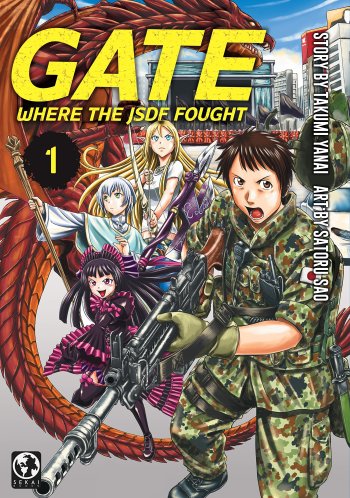 Gate is a rare gem amongst the thousands of mangas out there. It portrays a modern military (Japanese armed forces, the JSDF) versus an empire almost identical to the Romans.

Currently, after 75 chapters, I'm still looking forward to further releases. The story is interesting and well paced. You get to see both sides of an armed conflict and how the higher military powers operate and regulate the life of the troops on the ground. Whilst the modern day JSDF have very few issues taking on an entire bridgade of Roman style troopers, you don't mind the sheer overpowered nature of them. It's utterly cathartic, especially with a revenge hook at around chapter 35. There's a huge world and the MC (Special forces and an Otaku) gets to explore it all whilst trying to play peacemaker.

The art is very well detailed too. From the finer details on attack helicopters to the scales of Wyverns, it all looks believable. A hard feat for mangas to achieve. However, it can sometimes be hard to keep track of whats going on during fight scenes thanks to the intricacies.

The characters are all well thought out too. Even the side characters. They each have some personal charm and are unique to the imaginary world they inhabit. The only issue I have is with some fanservice parts as it detracts from the plot. That is still a minor headache compared to this fantastic story.

As a side note, it's very gratifying to see that Antagonists truly get what they deserve.

Everyone should read this!

This anime is insanely fun to watch and read, if you want more detail read it if you want action watch it. I highly suggest this to guys that like funny, awesome and interesting anime/manga like this where you have people with guns fighting fantasy themed enemies. Because seriously who wouldnt want to see a Dragon shot by a AA and Rockets? Who wouldnt want to see those silly Knights attempt to charge are base while hit with mines, artillery and snipers?