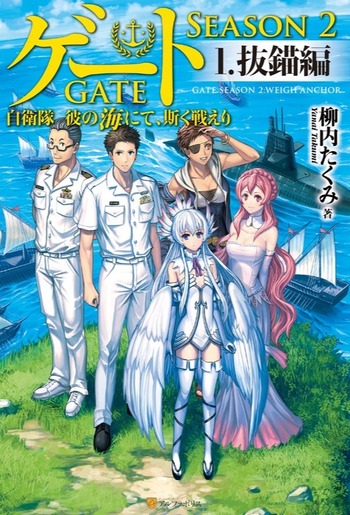 If you're looking for manga similar to GATE: Season 2 - Jieitai Kano Umi nite, Kaku Tatakeri (Light Novel), you might like these titles.

In the Great Orient, lies the continent called Rodenius. One day, an unidentified flying object arrived at Qua-Toyne Principality’s airspace. The unidentified flying object defied the Principality’s common sense. But that unidentified flying object was just a harbinger of something even more shocking. Far to the eastern sea, a group of islands suddenly appeared. The country of the islands called itself: Japan. According to them, their nation had been transported to another world. Now finding themselves separated from their old world and must survive in the new one, how will Japan interact with the native countries of this world? Will they greet her as a friend or as an enemy? This is a story of the country called Japan as it was engulfed in the chaotic storm of the world.

Inept with a sword, unable to ride a horse, and apathetic toward the empire he serves, Regis Aurick is a hopeless soldier who spends his days buried in books. Banished to the borderlands, he encounters a stirring young woman with red hair and ruby eyes. She is Fourth Princess Marie Quatre Argentina de Belgaria, known simply to Regis as Altina. “…Do you want to become my tactician or not?” Having sought him for his rumored strategic prowess, she aspires to reform an empire led by self-seeking nobles and driven to pointless wars, the legendary blade of an emperor, the Grand Tonnerre Quatre, at her hip. Continuously underestimated by her regiment, including her would-be tactician, the princess resolves to prove her worth beyond a shadow of a doubt—no matter the risk. Here is a tale of war, love, and politics, woven by the bookworm and the sword princess.

“I’ll be waiting. Until the time when your arrows reach Shizreed.” The bow is the weapon of cowards. Having gotten used to hearing such phrases from his homeland, the girl’s words showed him the path for him to tread and he gained the things he wanted to protect. Two years later, the Kingdom of Brune entered an alliance with Zhcted and they joined forces against the Great Kingdom of Muozinel. The battle seemed to be going well until the Brune forces fell into an ambush and the war front collapsed, forcing Tigre’s troops to retreat in defeat. The one who saved him from his predicament was the Vanadis of the Kingdom of Olmutz, Ludmila. However, what awaited them were more battles. The fight against the forces of darkness in this age of legends starts now!!

Herian was the ultimate player of the nation-building VR game “Tactics Chronicle” when he got transported into the country he built himself in the game. There, he met the great army of magical beast which possessed their own ego, as well as his peerless former NPC generals. Hiding his identity, what he found together with his vassals were the Elves battling against a great evil. Seeing the tears of the innocent masses, he came to a realization of his duties as king and made a declaration in anger. To vanquish evil with the hundred thousand magical troops under his command! “Stand up, my brave people! Now is the time to bare your anger!” ““OOOOOOOOOOHH!!!” The moment the thunderous roars resounded—the peerless Alchimaira breaks off ahead!! The king of a thousand beasts now orders the attack of the strongest army!!

Hiroyaki Kuze, part of the Ground JSDF, was assigned to the fleet of JSDF ships being sent as reinforcements to a UN mission. The flagship of the fleet is the Aegis class Destroyer Ibuki. However on their way a girl with wings transported their fleet to another world. A fantasy world of Swords and Magic. Kuze’s platoon was sent out scouting to see where they were. His platoon found and landed in the capitol of the United Kingdom. Kuze’s platoon attempted to withdraw when there was an attack by the Firuborugu Empire on the capitol. However when children were in danger they protected them. The Empire regards them as reinforcements for the Kingdom! On land and sea the power of the JSDF in the arena of warfare explodes! The alternate world JSDF fantasy that was popular on the net has made it’s long awaited novel debut!

In the war against neighboring countries, the Grand Duke’s warriors use dragon-like beasts called Touda as weapons. Touda are admired across the nation and villages take great pride in breeding them. Erin lives in one such village with her mother, Soyon, who is the best beastinarian in the country. However, life in the village is not so straightforward: Soyon is also an Ariyo, a woman of the Mist People - a race that is feared by humans for its mystical abilities. So that she and Erin can stay in the village, Soyon must flawlessly fulfill her duty capturing and disciplining the Touda; but while Erin wants nothing more than to become a beastinarian, she also feels sorry for the Touda and recognizes that there’s far more to them than meets the eye. Can Erin ever become an ordinary beastinarian when her deepest instincts tell her there is a better way to interact with the Touda?

Alderamin on the Sky (Light Novel)

The mighty Katjvarna Empire is currently embroiled in a war with the neighboring Kiorka Republic.  Within an unspecified corner of this empire, a certain young man was reluctantly preparing to take the High Grade Military Officer Exam owing to mysterious circumstances. His name is Ikta.  As a man, Ikta abhors war, is slothful by nature, and worships the female form.  At the time, no one could have possibly predicted that a person like him would become a military figure worthy of being called a legendary general... The young Ikta, armed with his superb talents as a soldier, struggles to survive in a world ravaged by war. This tale will recount his tumultuous life up until this point, as the curtains are drawn for a spectacular chronicle of fantastical warfare!

Glory won over the roar of cannon fire, peace exists simply as a time to prepare for the next battle. A soldier in a militarily-advanced nation, Balzer quickly advanced in rank. However, his career takes a sudden turn when he is reassigned as an adviser at a military school in a neighboring allied nation. Faced with little military power, untrained students, and civilian opposition to firearms, will Major Balzer be able to win over the soldiers and civilians?