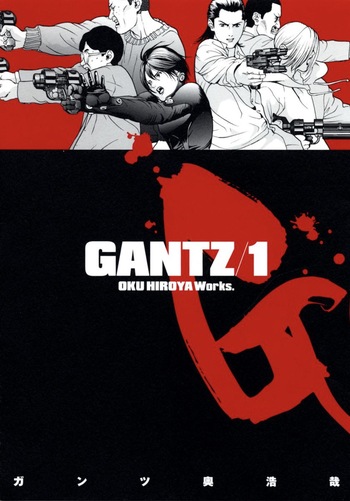 Warning: There are some spoilers in this review!

Do you like manga that has blackface? CONSTANT mention of rape? unnecessary killing? intense over sexualizing of the female characters, that are only introduced to quickly fall in love with one of the male characters? Then this manga is for you!! When i first started reading Gantz it was pretty good at first, i started noticing the female characters were really oversexualized, (every chapter has a page at the end with one of the female characters either wearing a bikini or nothing at all) so i thought of dropping it, wish i did lmao. I really thought it was going to get less problamatic, but it never did. Over the course of the manga, the story gets more and more confusing. Nothing is really explained. I can't believe how much rape is mentioned in here like it's nothing? I can't count on my fingers how many times i read "i'm gonna rape her" or something disgusting along the lines of that. Like even around the end of the manga, they forced two of the giants to have sex, while they were crying and both clearly didn't want it. Then there was another part where one of the random characters starting raping one of the giants, and when she tried to pull away, they shot her head off. Then we get to the blackface. I was so disgusted. One of the main characters "Izumi" put on blackface to go gun down a ton of people for such a stupid reason as getting Kurono's attention. Literally the whole chapter was Izumi just killing people. Great character. If you REALLY don't see anything wrong with that, then PLEASE reflect on your beliefs and opinions. The character development is poor, the only character who actually changed was Kurono. The ending left a ton of questions unanswered as well.

What started as an incredible story some where along the line turned to utter rubbish. I'm not sure what happened but maybe about half way through it took a 90 degree turn and never looked back. Characters that only recently were introducted were quickly forgotten and even an entire race (species/evolution) of people that were poised to play a significant role just stopped being written about.

Maybe I'm the one that is missing something but this whole manga just feels like it fell apart.

Reviewed after completing the manga.

This series was unlike anything I've read previously..

Although initially put off by the art style (which I got used to), its extremely cynical take on humanity and its grey-morality of the whole thing really managed to make me think about a lot of things to do with the state of the world and everyone's potential for evil given the circumstances.

It went on to show me in its full glory, uncensored portrayals of public shootings, school massacres, rape, and all the things you'd think the authorities will ban. It was eye-opening.

I feel like the story was a grim tap into the worst of human nature, allowing even the smallest amounts of goodness to truly shine. While it ended abruptedly due to circumstances, I would still definitely recommend it.

Unfortunately it left me quite disappointed.
It started very well with an interesting plot, and half way through it took a completely unexpected direction with no particular reason. I'm not going to question the themes the manga talks about, it is a seinen after all, so I was expecting some strong and challenging topics (sexual abuse, crude violence, etc). However sometimes it felt like these topics were used just in a stereotypical way, without much to say.

One of the biggest problems for me was the lacking of explanations of what was going on - at a certain point vampires appear, why? Where did they come from? Why do they want to kill the Gantz team? And why do two characters have paranormal powers? How does this fit in the plot? (Maybe I missed something?). A lot of things were put on the table, but kind of rushed, which left me a bit confused.
In terms of charatchers' development, I didn't notice any. They stayed pretty much the same all troughout the manga, which is a shame, as the narration could have gained something from a bit of introspection and proper self-analysis from at least one of the main characters - it feels like Kurono just wanted to be with Tae-chan....which would have been fine if I was reading a shonen manga, but pretty weak motivation to power through for a seinen one (to be honest everybody fell in love a little bit too quickly).

Nevertheless, the art was pretty good. Only towards the final chapters it became a bit confusing - there was a lot going on in one single frame.

This is just my point of view, I hope someone else liked it more than me! Eventually all types of art have more than just one interpretation and they are personal and subjective. We read because we love it ;)

Gantz will always be one of the best manga I have ever read, it's such an amazing experience with some of the best character development I have seen in any comic. It looks like Hiroya really put his all in this one. Truly remarkable... Until the last arc, of course. Everybody who has a minor understanding of what the characters motivations and personalities were will be left speechless by this last arc. Everything was wrong with it, the characters, the story, the goddamn drawing and composure of the action sequences, it was all a mess...

But still, before the last arc, everything was excellent. Will i recomened it? Yeah, but stop reading it like at episode 300 i think, better to leave it incomplete than to see it become mediocre.