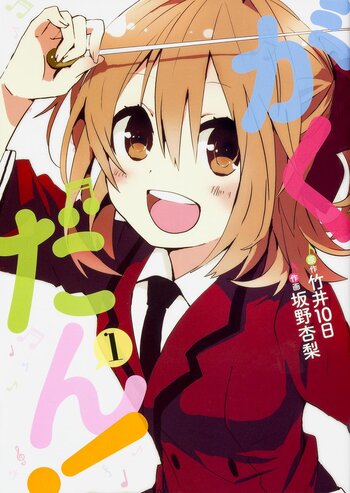 The near future, drinking into the wave of progressive data conversion and flattening, digital music has been losing value, On the other hand, "live artists" expressing realistic music were reevaluated and became the admiration of many people. In such a world, girls struggle to win peaks at the live artist training school "Kanadegaoka Girls School". This is a story of the girls who aimed for the top of the live artists and fought with songs as their sword.

Asakura Kosame is rejected by the girl he likes. He bought a guitar and created a song solely for the confession on his graduation day in Junior High. Unfortunately, the girl likes another cool boy from another school, whom happens to be a member of a band.Later, Kosame enters Meirou High. He decides to join a music club and become great to show it to the girl whom rejected him for revenge. But, it turns out there is NO music club at Meiro. The one who sees him at that time is...

In order to follow her dreams and be like her mom, Chika sought out her mom’s high school to join the Folk Music Club. However, when she entered the school, the club that her mother made famous no longer existed. Depressed and at a loss for what to do, Chika eventually meets Tenko who wishes to create a band and believes Chika to be the answer. Chika is excited to be able to play in a rock band but... why are the other members all holding string instruments?

Jumonji sits next to a rapper girl who is also anti-social... what will they do to realize her dream of becoming a real rapper?