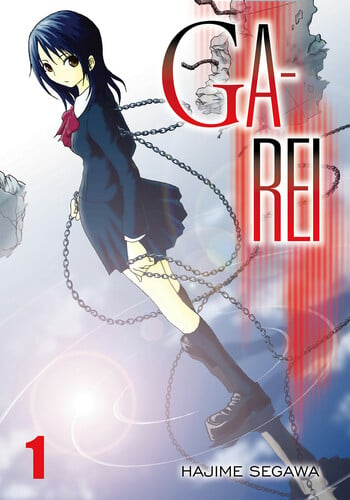 Previously posted on the blog in a post titled Ga-rei... why, oh WHY?!

I just finished reading Ga-rei and I must say I'm totally disappointed. The manga starts of as a decent (though somewhat generic) shounen. Boy meets girl (rather gets run over by her scooter) then boy and girl fight some evil spirits etc. It's that kind of cliche thing, but it's somewhat ok, until...

...it gets extremely cheesy halfway. From there on the plot goes only downwards (and really fast at that). The story doesn't reach the level of crappyness that Kurohime and Medaka Box posses, but it's still bad. Like in Medaka Box, cool moments (characters looking cool or doing something cool) are not enough to make the series enjoyable. One thing I dislike in supernatural series is when the author gives half-a**** explanations of what is going on (especially if, he is using cultural mishmash for those). If a scene makes little sense on it's own (unless it's a mind-f***), that's not really good, but If a scene makes even less sense with an explanation it's really bad. It usually means the author is just pulling stuff from the "usual place". Less often, it means that he made the mistake of explaining stuff (I'm looking at you Star Wars). It's not really easy to describe, but it's a really bad thing to have in a story and it happens a lot in the Ga-rei manga (especially towards the end). The ending of the manga is really rushed, but that's because Ga-rei was canceled (I'm not surprised). So about the ending, as much as I like happy endings this one was crap...

P.S. Matrioshkas being an end bosses in Moscow was a real fail on the author's part.

This mini-review is based on the first 9 volumes of the Ga-Rei manga.

With an (I can only asume) high-budget and awesome in nearly all aspects of awesomeness anime-prologue like that, surely the manga has to be something else, right? Wrong, well, it IS something else, but not in the good way.

The first thing that bugged me, was that Kagura's personality is almost completely different from the anime. She has the typical archtype Comedy / Action personality. Yes, that's right, Ga-Rei is an Action / Comedy, with a wee bit of Romance / Drama thrown in, your typical ongoing Shounen manga.

If you can get over the change from Action / Drama to Shounen, Ga-Rei does turn into something readable. It has some good points and moments, but never really escapes the realm of "barely average" manga's. Every time I got my hopes up after something interesting / awesome happened, they almost always quickly killed it by throwing in something cliche (*cough* Vol 8, Page 8 *cough*).

Lastly, the drawings weren't something to write home about. It wasn't done badly, but I certainly was expecting better, for example: the use of shades is nearly non-existant.

Overall: Ga-Rei has a decent storyline, and Ga-Rei -Zero- fans will enjoy seeing most mysteries it had being explained, often in a great way. However, everything else barely passed the average-grade. The only thing that kept me reading were the occasionally strong moments and the determination I had to finish it when I just started reading.