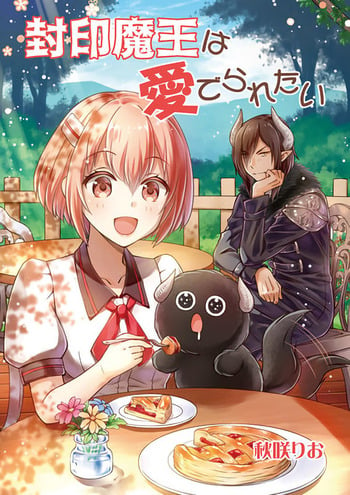 The spirit Sylpheille sums up the relationship dynamic succinctly in chapter six: "It's a marriage of convenience, but it seems the demon king has a crush on Lillian. And Lillian rejects fem, but fe's just hiding feir embarrassment." The mention of a marriage is referring to the fact that the demon king--known as Graham in humanoid form and as Woolbo in fluffy beast form--has to either marry or murder the girl who kisses fem in order to fully release the seal. And while Graham definitely has landed upon the marrying option since fe likes Lillian, the murder option is brought up a couple times in order to allow for some light tension and drama. I personally don't find Woolbo to be particularly cute, though there is some humor in the fact that fe tries to act frightening and just comes across as cuddly and adorable. The cutest part of the series is how Lillian blushes and acts all embarrassed.

Each chapter is very short, since this is a doujinshi. The artwork is decent enough. Other than the romantic and cutesy stuff, the storyline is following how Lillian wants to be able to use magic and how fe is unable to do so (but is able to do something else instead).