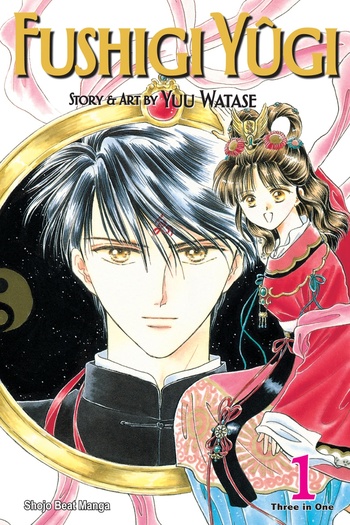 The art and story for this manga are phenomenal. The story starts simple, and rather fantastic, 'a girl falls into a book and is given seven beautiful men to protect her so she can be granted any three wishes and will be revered as a prophesied hero by all in the land in the meantime'. The story quickly becomes more complicated, however, as friends and family are drawn into the mess, Miaka finds herself trapped and in very real danger, and the country about to go to war with hers has their own legendary hero looking to get wishes, too.

The main character isn't perfect, and her mistakes have real consequences. This isn't a magical girl story, or a light-hearted shounen adventure story where no one is hurt or killed while the hero fools around and saves the day. Innocents are dragged into things, a war is raged, and if Miaka makes mistakes, not only may she be trapped inside forever, but she and all of her friends will surely die as well.

The main character is selfish and childish, and her unwise and selfish actions have consequences, harming people around her who she cares about, and even turning her oldest friend against her due to her own mistakes.

The story is compelling and complex and well worth re-reading multiple times. The art is beautiful and holds some of the most beautiful characters I've ever seen drawn in manga. The side and even minor characters are well written and interesting, and even the villains are believable and sympathetic, even when they're evil or cruel and manipulative.

The only two troubles you'll face reading the manga or watching the anime are the romantic plot tumor of the main romance (manifesting as the infamous shouts of 'MIAKA!' 'TAMAHOME!' each episode in the manga) and how truly selfish and childish the main character, Miaka, is. She doesn't develop very much in the series, and much of what she does only addresses her best friend and chosen love interest. The trouble with her single-mindedness, is that when she repeatedly tramples feelings of other characters...those characters are written in such a sympathetic way that it's hard to ignore or forgive. Often consequences of her actions affect others or only her indirectly, and much of the time Miaka and Tamahome become far too wrapped up in their own drama when the lives of thousands are in the balance...and other characters are far too tolerant of this.

So, this is an anime which has an excellent story, amazing art, and excellent characters and is well worth watching or reading (the manga has much better art than the anime, and the anime english dub was done in a time when it's considerably lower quality than current ones) ...but you may find that you despise the main character, and later her love interest as well, as you read it and watch their characters erased for the sake of the requisite shoujo romance.

This is an 18-volume shoujo manga series from the mid-90s by Yuu Watase, which has since been adapted into a 52-ep. anime series.

Having read the manga first - and started watching the anime while reading vol. 15 -, my main drive for wanting to watch the anime was firstly, and mainly, because I was enjoying the manga so much that I was spurred to watch the anime version. I had a real hankering to see how the characters moved when brought to life, which is a very positive thing that indicates just how invested I was in the characters and their individuality.

It's a freshly-spun tale, with some creative license taken with the actual Chinese myths and legends it's based on within the book, The Universe of the Four Gods, but Watase did a fantastic job with weaving romance, drama, adventure and very good character development in this series, despite the ease in which stories in the shoujo genre can often be predicted to lead. Allowing for some tried-and-tested 'separated lovers' trying to do the best they can by each other by putting themselves through individual emotional turmoil, Watase masterfully plays the 'Person in a Strange World', both Miaka and Yui, the main protagonists, alongside the characters surrounding both girls, and challenges / parallels / conflicts they both face. Importantly, Watase also manages to maintain plausibility in the background plot devices, with two teenage girls just suddenly disappearing from the face of the earth and the many ripples caused by this.

The story progresses well. I don't recall ever feeling bored or disinterested with this series, even though I was reading the manga at the same time, which is a notable testament to the series' intrigue and well-written characters.

There is no doubt that Watase is a talented manga artist who places great skill in making her characters distinct, fitting to the context (in dress/manner/personal circumstances) and generally really lovely to look at (even most of the 'bad' ones). The aesthetic, personally, at least, really tends to appeal to me on an almost totally superficial level in that 'pretty people' are often far more engaging to the eye and manage to continually pique my interest. Their actions often have me staring back and forth between pages at a particularly poignant/detailed scene, trying to see 'everything', regardless of their 'good' or 'bad' status in the story.

This is a powerful motivator which consquently ensures that I absorb more of the manga in general, including the story, and also keeps my eyes wanting to experience more of the same aesthetic stimulation page after page.

I don't want to oversimplify my enjoyment of Fushigi Yûgi by sounding vapid and blank, because this is only one facet of what may fundamentally spur my enjoyment of a manga. But ultimately, the point stands here that Watase is very good a maximising this level of appeal for me.

Well, I could write pages and pages about each character and why I loved, hated or loved and hated them. Such was the strength of the characterisation; there was plenty of room for developing these 'complex' relationships with each character - with some often challenging your opinion of them and still managing to hold a piece of you (in either the positive or negative extreme).

The characters and their individuality (and of course, their interaction and 'togetherness') isn't treated cheaply, and each bond is shown to be tested and mature alongside the story. Even outside of the paradigm of Miaka and Yui's direct contact with the characters around them, the story is still allowed to have 'a mind of its own', and the characters expand their investment in their quest(s) and their relationships beyond just that of the main objective(s). It's really heartening for me to have experienced that, and it adds another layer of depth to the viewing experience.

Without giving anything away, I will say that Tasuki was my favourite character, closely followed by Tamahome and Hotohori. And I normally wouldn't include such a firvilous note, but I feel the surprisingly strong need to pay homage to their effect on me within their roles in Fushigi Yûgi, no matter how lame it might sound to say that!

I would most definitely recommend this (in both anime and manga form) to any fans of shoujo/romance/drama/adventure etc. But also to anyone looking for a solidly entertaining, lighter series to get lost in!

First of all the manga is incredibly annoying to read because of its chaotic layout.

The art is concentrated only on the main characters and nothing else. The background, if there is any, isn't worth looking at. The pages are pretty much filled with just people, that btw look too alike, and way too many speech bubbles.

The characters have nothing going on for them but their looks. Everybody seems to be in love with the heroine the dimwit glutton. Her best friend supposed to be super smart but it's hard to follow her logic. Just no...

The story is flat. There's no real drama or tension because everything gets solved pretty quickly and predictably. Also it tries to be a comedy but I honestly haven't even giggled once while reading.

Garbage. Dropped it after volume 6 cause at that point I just stopped caring.

Fushigi Yuugi, created by Yuu Watase, is one of my most memorable manga's i've ever read. I consider it one of the best shoujo mangas out there. If a shoujo manga attracts even guys, you know it's something about it has got to be good.

Story: It's story is stunning. The legends and stories of the 4 priestesses brings me to tears. The betrayals between friends and the sacrafice that each character makes strikes at my very core. It's got a heart warming plot that makes it one of my favorite stories.

Art: Not bad. Even though it's from the 90's, i really like it. It really just depends on personal preference on wheter you like the artwork or not.

Characters: Each character in Fushigi Yuugi is memorable. They each come with a story of their own, some more tragic than others but even characters that appear for maybe just one chapter come with their own unique stories. There's two paticular characters from chp.50 whose story is my favorite. However, sometimes the characters can be a bit annoying but that's something really minor.

Overall: I really enjoyed reading Fushigi Yuugi. It made me laugh, it didn't make me cry but well that's cause i'm a guy. Guys don't cry reading sob stories or do they? It did make my heart cringe though. Just read Fushigi Yuugi and be prepared to join the ranks of many fans already in love with this manga phenomenon.

STORY: I've read the Genbu part first then came to watch/read this. I love the plot SOOO much. I love the search for the 7 warriors and all the hardships they have to go through together. The setting and the Chinese references were all so interesting!! I've watch the anime of this first before going to read the manga cause i heard there were some cuts in the anime, but not too much to be important.

ART: The art was ok i guess, Yuu Watase's art are all beautiful and i really enjoyed reading his works.

CHARACTERS: I love ALL the characters; all the seven Suzaku warriors, the priestess; Miaka and Yui (though i did dislike her at the start) and I love how strong willed Miaka is, nothing can stop her when she puts her mind to it and all the warriors came to love her and support her. (Even one of the enemies came to aid her) I love the bond between her and Yui and how hard she tried to get her best friend back even though she's kindda powerless.

Oh, and i must not forget Tama-chan!! At first Tamahome seems like some guy who only lives on money, but further on, he actually a great guy who would do anything to be by Miaka's side to protect her and be with her. Their love for one another is something I really enjoyed and love about this manga/anime.

My favourite character in the anime/manga would be Nuriko cause he's kind of like a brother to both Tama and Miaka and always try to get them together and give them brotherly advices. Love him!!!<3

OVERALL: i wanted to give it a higher rating but at some parts of the anime, i just dont understand what was going on with the plot. But overall, it was an enjoyable read. I would recommend watching the anime if u rather like looking at moving pictures rather than reading.:)