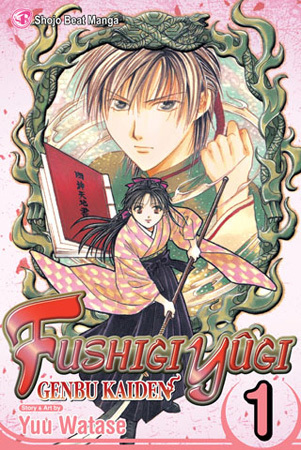 First off, Fushigi Yugi: Genbu Kaiden took place a hundred years before the events from the anime, Fushigi Yugi: The Mysterious Play, happened. Personally, it isn't really necessary to read this manga before watching the anime. There are just episodes (& OVAs) which involved some of the characters in this manga to the series. It's not really something you're gonna miss nor will it spoil you whichever you decided to dedicate your time into first.

If you have seen the anime, this story is basically another school girl, just like Miaka and Yui but is the first girl transported into the book world, from a small Japanese town named Takiko Okuda. Taking care of her sick mother and dealing with the constant absence of her father, it's slowly taking a toll on her but decided to just keep it to herself. With the death of her mother, a broken heart from an unrequited love and the abandonment she felt from her father who got nothing in mind other than the book he was currently working on, Takiko's feelings of despair heightened. Basically, those feelings led her to open a passage to another world inside the book her father had just finished working. It wasn't really intended to be magical, but it did. The book is about ancient China and the legends of its four gods. Once she entered the magical world inside the book, she became the Priestess of Genbu, and there's no escaping it.

The Story plot is amazing. It's a whole lot different from what the other two ladies from the anime experienced so I had no idea what to expect but it did not fail to amaze me. Made me cry and laugh hysterically at the same time, if that's possible. Wow, I sound crazy.

The Art is fantastic. Everyone is very pretty, no doubt about that.

I watched the anime before reading this manga. As much as I love Miaka, Takiko made me cry my eyes out. She had been through so much but was still fighting till the very end. You just gotta love her determination despite getting rejected by her celestial warriors in the beginning. All the characters were pretty cool, especially the Genbu warriors but, not to be biased, I have my favorites. I personally love Hagasu and Hikitsu. They stand out the most among the other warriors, beauty wise, in my eyes.

So this manga is a 10/10 for me and I want them to adapt this into an anime so bad. I'd want to watch my lovelies moving. But seems like it ain't happening anytime soon tho. This manga is definitely worth the time (though I might be a bit exaggerating since Fushigi Yugi is my all-time favorite). Just check it out and hope you'll love them as much as I do!

Best to start at the beginning with the contextual background!

Fushigi Yûgi takes us through the adventures of Miaka and Yui, as they are trapped in a cursed book and spurred forth, pitted against each other by chance, to fulfil an ancient prophecy in a literary land resembling ancient China. This story takes us to the final events surrounding Miaka and Yui's heartbreaking battle, as the Priestesses of each region, to summon the ancient dieties known as Suzaku and Seiryuu. In this, we are made aware that Miaka and Yui are not the first priestesses ever to appear, and we are given some details of another priestess's journey, fraught with tragedy, to summon Genbu, long ago.

Even though reading the original series gives details which might be seen to 'ruin' the story before it was ever written, it is pleasantly surprising to see the similarities in how the author creates the same level of investment in Fushigi Yuugi: Genbu Kaiden as she manages in Fushigi Yûgi. The journey's goal is the same, but the main protagonist in the prequel title is given circumstances distinct from the orginial series, while remaining true to the presence of a driving force behind her will to complete the task - no matter the outcome.

The art was a quality I've come to love and respect from Yuu Watase. Her hand is consistent, adequately detailed, expressive and easy to absorb.

Just like the original series, I found that the characterisation, interpersonal relationships, romance, conflicts, sacrifices and 'adventure-like' development common both of these manga make it a joy to read and makes the entire world of the cursed book feel that much fuller and satisfying to absorb.

The romance felt fresh, their commitment felt genuine, not a foregone conclusion. The characterisation paid respect to each individual and their narrative right to become part of the story on their own terms. No character was merely an accessory, and their journeys were successfully portrayed as tangible actions and reactions to the organic story. This is a great achievement for a story that was essentially 'spoiled' before Takiko was ever a line on a page.

I was sad to see it finish - even though the final book took a year or so to emerge!

I read this Manga when I was 13 Years old the first Time and fell in Love with each new Page, the story and Charackters were Amazing and you could get in the story very quickly.

I think its even better than Miakas and Tamahomes Story in "Fushigi Yuugi" it takes place 100 years earlier and the charackters are more Warrior like, the same goes for the Action parts the flow is much better and a Perfect mix of Love Story, Comedy, Action,, History and Fantasy Manga will await you!

You defenitly will fall in Love with Takikos Pure being. She never gives up and always shows a kind smile to her Friends and loved ones.

For every Drama, Fantasy and Historie Manga Fan defenitly a must read  ;)

Fushigi Yuugi Genbu Kaiden. definitely a must read. One of the famous isekai back in the days. If you loved the adventures of Miaka in the first Fushigi Yuugi, you'll love this one more. I especially loved the female heroine's character. Takiko Okuda is the most selfless, loving, nurturing main character, the best priestess in the Universe of the Four Gods periodt (Suzuno's arc is still ongoing at the moment but I'm still Takiko biased). You will love her relationship with the Genbu Shichi Seishis which was totally different from the first FY. I'm sorry I couldn't help but compare the two FY stories and why I prefer FYGK more. Though the last two chapters of FYGK almost killed me. I couldn't read it right because of the tears in my eyes.

Firstly, Fushigi Yuugi: Genbu Kaiden is a story that takes place BEFORE the original Fushigi Yuugi. So it would be better to read this before reading Fushigi Yuugi. It won't make much difference but trust me, you'll find the story flow better.

STORY: The setting is set like in the 18th century China, with a lot of chinese references. Which is one thing i love about this manga. Basically, its about a girl from our world, doing what every ordinary Japanese student does, except she have to take care of here sick mother and deal with her always absent father. Then one day her mom dies from the illness and the father came back a tad too late with him, the mysterious book that will start her journey in a new world.

There, she's said to be the priestess of Genbu. And has to find the seven Genbu warriors in order to summon Genbu to save the land. This is also another thing i really love about this manga, each of the Genbu warriors have a chinese mark on them and this will allow her to identify them. So thus her journey starts....

ART: Hmmm, no complains here. The art here is beautiful in my opinion.

CHARACTERS: I LOVE all the characters in this manga!!! All the Genbu's seven warriors were all interesting and easily liked. Especially Uruki!!!He/she is my favourite!!!The main female character; Takiko, is a cute and enjoyable character to read and she doesnt annoy me like other female helpless characters who are always waiting for someone to rescue them. She tough and strong willed. The rest of the Genbu warriors are also easily well liked and I love to read how Takiko use her kindness and her will to get them to join her.

OVERALL: I LOVE THIS MANGA!!!Its been a long time since i've read such a great manga. Highly recommended for everyone who's interested in adventure genre or going on a journey to find things/people.<3<3<3