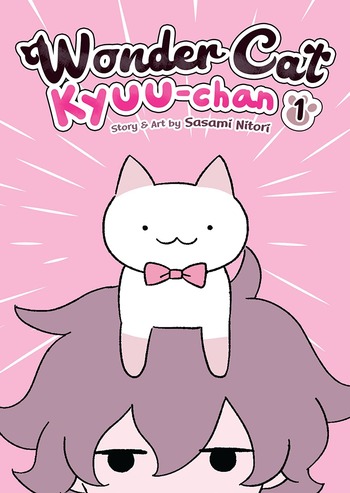 There’s more to this kitty than meets the eye! Kyuu-chan loves snacks, cuddles, and bow ties, but above all, this mischievous wondercat loves Hinata, the young professional who adopted Kyuu-chan into his home. As the two adjust to life together, they discover that they have a lot to learn from each other.

This is definitely cute and adorable and very easy to binge-read (though perhaps not all of it at once). That being said, it's not as though every chapter is cute or funny and many of the jokes end up feeling similar, which makes many of individual strips feel more boring than anything. It follows a cat, Kyuu-chan, who loves his dead-eyed owner, who reciprocates that love. He tries to be helpful and supportive in his own weirdly humanistic ways, while also having a child-like understanding of common sense. He walks on two legs, wears socks, has superhuman strength, and so on. The story will sometimes riff on stereotypes, folklore, or memes about cats: such as them seeing ghosts, being scared of vacuums, and freaking out at the sight of cucumbers. We know nothing truly bad will happen in this world, so we can relax while reading it. The extent of the drama is somebody getting bummed about something, and then getting cheered up. The art has a lot of shades of pink and soothing pastels. It uses a minimalist style which works very well for what it's trying to do: be cute. It's actually nice that it keeps it simple and doesn't try to sparkle or do anything too over the top in its quest for cuteness. Some of the chapters are GIFs. This is the perfect manga to ask ourselves: What makes something adorable? With Kyuu-chan, he's adorable because he's a cat doing human things, but also because he has a child-like innocence and ignorance. There's a complete lack of distrust or cynicism in Kyuu-chan and Hinata's devotion to one another. They affirm one another and cheer each other on, unreservedly. Basically, I think it boils down to adorability being connected to the absence of world-weariness, to the absence of nuance and realism. We find ignorance cute. It's not as though we personally want this childish innocence for ourselves, but seeing the purity does bring us a sense of comfort and allows us to set aside the problems of the world for a bit. So the next question then is: Is finding something adorable an inherently condescending position? I actually think it might be. But unlike pity or other, more negative, condescending attitudes, finding something adorable comes from a place of no expectations. We don't expect children to take the negative parts of life into consideration. We don't expect animals to be able to engage in questions of political reform or ethics or whatever. So we see their lack of deep thought and we interpret it as adorable, but if we saw that same level of shallowness from an adult, we would pity them. This could also be why manga that try to capture the adorable aesthetic while portraying teenage or adult romance will frequently rub me the wrong way and feel empty.  As the series continues, a cast of characters are introduced, including several other pet owners and pet lovers. The ghost is a stupid character. Ooshima introduces an interesting dynamic, where Kyuu-chan bites him instead of treating him with the cordiality that he shows most people. Other than the main two, my favorite character is Mari, the shop lady. She's cute.  [Reviewed at chapter 718]

If you like cute things and/or cats, you will love this to death. It's literally the perfect 4-koma. Sometimes there are short arcs over a few chapters, otherwise it's just the most heartwarming wholesome thing you can imagine. Also I'm pretty sure it's released daily. In all honesty you can read like 100 chapters in an hour so what do you have to lose? Go brighten your day and aww out loud at the adorableness that is the daily life of Kyuu-chan and their owner Hinata.