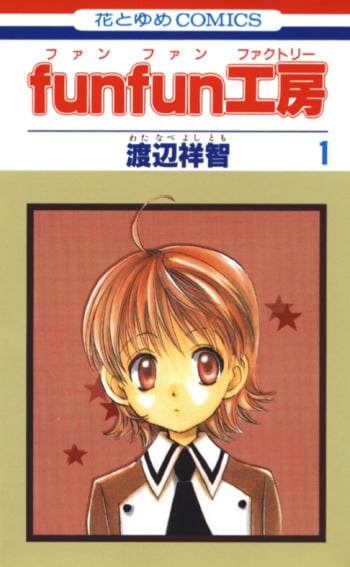 Misaki Sakurako is a thirteen-year-old girl who loves ice cream and cherry blossoms. Living alone, she had a weird dream that told her she is the only savior to three young child boys... Strangely enough, she woke up to three handsome strangers who asked her to resolve their dear curse--their bodies will transform if they see any slightly "perverted" materials (posters, pictures, etc.). The only way to prevent them from transforming would be...?

Watashi to Shishou to Kagetoki no Tabi

Alicia, a live-in apprentice of sorcery, wants to follow the footsteps of her Master—Kyle. Alicia is frustrated that she cannot seem to remain mad at Kyle even though he acts like a womanizer. When yet another ordinary day seems to have resumed, something sinister happens. Kyle opens a letter which turns him into Alicia's shadow! Kyle realizes he has been cursed by the witch who he once turned down. To make matters worse, Jinno and Shuu, two envoys from the Royal Palace, show up to collect a magic item Kyle was due to deliver but had not. As Kyle hides in Alicia's shadows to avoid meeting the two envoys, Jinno gets his hand on the cursed letter and no sooner had he started reading it, he is turned into a shadow as well...into Shuu's shadow! Now the four of them must embark on a journey to reverse the curse! Let the wonderful journey begin!

Ouji to Majou to Himegimi to

When the masculine and popular-with-the-ladies Ooji Subaru arrives at her new school, her encounter with her childhood friend Megumi and the other four “princes” of the school leads to the discovery of her past life. She is the reincarnated Prince Charming, who was a womanizer who seduced all of the princesses in the land. As a result, a jealous witch placed a curse on him and doomed him to be reincarnated as a woman for eternity. In order to break the spell, Subaru must find the “princess”—now reincarnated as men—who is her one true love!

Rin, a girl fresh from the country, is discovered by Dragon Knight Grian to be the new Star Princess, whose job it is to bring good harvests to the kingdom through her prayers. Rin's powers awaken as she tries to bring the barren lands back to life in order to cure the curse that eats away at the Dragon Knights. However, more and more questions turn up!! Rin finds herself caught up in the mysterious murder case of the previous Star Princess, Fionnuala! What does the future hold for this country girl?

You see, there are kamisama, a deity, in her hair. A Shinto ritual called kamigamigaeshi allows kamisama to rest in a girl's hair to heal themselves … One day, Mashiro, who has been confined in a small room, meets Hinokagu, a kamisama who had been sealed inside her hair … ?! Super Kamigami Fantasy!!

Ruki is an otaku and is in love with a character of manga called Shun-sama! Suddenly she meets a guy that will live in her house due to her mother sudden travelling and who looks exactly the same as Shun-sama! But is this guy really as prince-like as Ruki expects?

Masaki Aoi is a high school student with a sweet tooth. All her life she has been treated like a boy but change is on the horizon for this tomboy! Yuase Takumi is a third year middle school student. He's also the president of the Confectionery Club, and he's extended an exclusive invite to Aoi to join his club.... too bad he thinks she's a HE! But pressure from her classmates forces Aoi to play along and she finds herself joining the Boys-Only Confectionery Club.

In the world of the high society, it is expected that each member of every family has their own personal butler. Himeoka Kokoro is a natural tomboy with a knack for sticking her head into trouble. Kokoro hopes to be able to hire a butler for herself, but only temporarily so she can partake in the nationwide "Miss Princess" model search. She is determined to win the competition because of a promise she made but runs into problems on the way. She incidentally saves an old lady who turns out to be the President of Butler, the most prestigious butler agency in Japan. The old lady decided to help her with the model search & Kokoro is suddenly faced with four good looking butlers to help her on the way to winning the title "Miss Princess".

A Rare Type of Girl

Andou Kanna is obsessed with a dating sim mobile game called Special Master-sama Complete. In order to earn money to buy the in-game gacha tickets, she looks for a high-paying part-time job. However... When she answers an ad for a job that pays in gacha tickets, she meets a group of young men who all look just like the characters in the game...?! What's more, the real versions don't act anything like their gallant game counterparts, and are always picking on her! Love in games and in real life... Surely it can't be that simple...?

17-year old Canary is a princess who was initially attracted to a handsome young prince, 17-year old Heath of a neighboring kingdom, during her first visit. Prior to their meeting, unbeknownst to her, Heath's pet lizard was forced by his master to take a magic potion, which turned him into a look-alike of the prince. By doing so, the real Prince hoped to create chaos which would lead to the annulment the his engagement to Canary. However, Canary finsa out the prince she met and fell in love with was indead Sean, the older brother of Heath...who was turned in to a lizard by a curse. Canary and Sean are deeply in love, and theyare determined to find a way to break the curse so that they can live happily ever after.