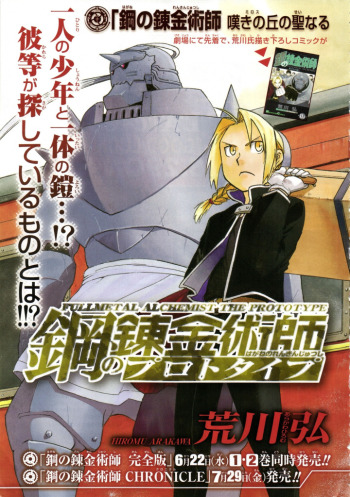 This prototype oneshot is basically a mixture of chapters one and three from the main series. We have a greedy and oppressive landlord (the plotline which became chapter three) who has a philosopher's stone (which is used in chapter one's plotline) and wishes to gain an immortal body which won't age or rot (a plotline unique unto itself). It's a bit weird seeing Ed actually grant this oppressor's wish, even if fe did so in the way that a mischievous fairy might--implementing the surface meaning of the words, but in a way that clearly ignores the spirit of the wish and leads to unwished-for side effects. It's also a bit weird that the weapons Ed conjures seem to have faces. I think the main series implemented both the idea of the philosopher's stone and the idea of an oppressed town in a better and more entertaining fashion while also introducing several other important ideas in the process.