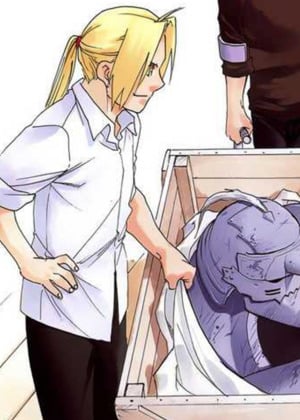 I suppose this could function pretty well as a palate-cleanser after finishing off the main series. It's mundane and portrays nothing of import, but perhaps that very mundanity brought some closure to some fans. I dunno. I didn't really care for it. It's basically an omake, though with a bit more of an attempt at plot than most. Not that the plot is good or engaging or anything. It's just telling the story of how they recycled the suit of armor that used to be Al's body--which, I mean, is nice I guess, but I don't think it really has much value beyond giving fans one final glimpse at these beloved characters.