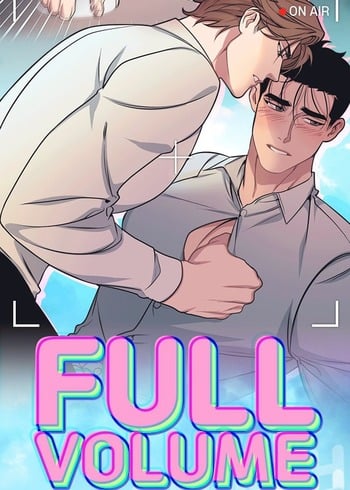 Both Lezhin comics are fantastic that carry plot lines: the main character finds out that their favorite cam stars happen to be people that they know. Full Volume is more emotionally tame in the beginning (thus far) compared to the more emotionally controlling relationship in BJ Alex. Don't let that deter you though if that's a deal breaker!

Both have the same concept of one live streamer and someone who found out about     the situation and is the start of a crazy soon to be love story.

Hyun was supposed to spend his Christmas snuggling with his cat on his comfy couch watching TV. This year, however, he decides to attend his company holiday party to make his existence known to his office crush—the devilishly handsome Alek—but instead, downs too many drinks, makes a fool of himself, and blacks out. The morning after, he wakes up to a Christmas nightmare: lying next to him butt naked is his despicable colleague, Ivan Mariani. Hyun has always hated everything about Ivan. So why does Ivan suddenly look different...smell wonderful...and radiate irresistible sexual energy?

Both of these stories have different premises, but the character dynamics and general tone reminded me of the other

Do-joon, who was fed up with his gay next door neighbor going at it day and night, was labeled a homophobe after complaining to them just once. Constantly clashing with his neighbor, he suddenly gets swept up by the atmosphere, and finds himself interwining bodies with him?

Ji Hyuk, a college student who has had a one-sided crush on Tae-sung, the man next door. Two years later, Tae-sung got divorced and Ji-hyuk, who was satisfied with their current relationship, was thinking about confessing... Tae-sung was a man who doesn't seem sexually interested at all. I've never thought about anything more than that because I would feel like I've done something wrong with just a little touch. One day, I found something surprising in his bag.

26 year old university student Gong Woo-Jin accidentally recieves a package meant for his rather loud neighbor. When Woo-Jin goes to return the package to it's rightful owner, he finds Yoon Yoonoh in a compromising situation... What awaits Woo-Jin and Yoonoh in the future?

"Let’s go, babe.” “Excuse me?? I was just making my way through!! SiHyuk, who was able to get a studio with good conditions, suffers from insomnia due to frequent lover’s quarrel between the couple next door. Then one day, he runs into the couple who happened to be having a dispute out in the hallway. SiHyuk gets involved with one of the two, JaeHee, and ends up becoming his pretend lover. With JaeHee’s ex, SoWool, being obsessive with JaeHee and acting like a stalker, what kind of fate awaits for SiHyuk and JaeHee who got into a pretentious relationship to shake SoWool off...?

The Pain in My Neck

Recently something's really been doing a number on Sumin. No medical test can seem to tell what it is, though. After several unsuccessful checkups, Sumin walks home to find…his next-door neighbor drinking the blood of a random stranger! Sumin’s thoroughly creeped out, but he soon becomes interested when the vampire claims that he can suck all of Sumin’s pain away. What could possibly go wrong? It’ll be worth it if a small pain in his neck will rid him of this mysterious ailment, right? Right?

Recent grad Wujin has no job, no purpose, no one in his life…till he meets Jin. Suave and sulking, Jin has a tough past but a soft exterior. Now, as next-door neighbors, Wujin can’t hide his feelings but…is Jin just toying with him? In that hot, wet, summer, will love reign?