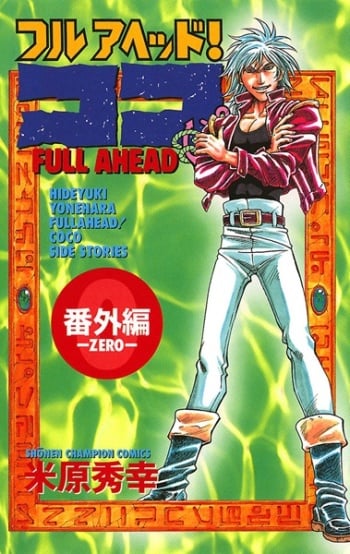 If you're looking for manga similar to Full Ahead! Coco Bangai Hen, you might like these titles.

Alto has always been followed by misfortune and his problems show no sign of coming to an end when he is suddenly kidnapped by pirates. He learns from them that the clover shaped mark on his body proves that he is the descendant of a legendary pirate. Finding the individuals who possess the spade, diamond, club and heart marks is said to lead the way to valuable pirate treasure.

Monkey D. Luffy is a wannabe pirate. One day his small dinghy encounters the Captain Gyari and Crescent Pirates, and after defeating them he disembarks into a quiet village to find some food. But when Gyari and his crewmates manage to escape from their bonds, they head into town with thoughts of revenge. Unfortunately, as Luffy chases after him, the villagers capture him thinking that he is the infamous Crescent Moon Gyari. Will Luffy indisposed and only one girl, Shiruku, willing to fight, it seems that the village is doomed…

Rose is a young girl who stubbornly believes herself to be a high-class princess. The one who came to "kidnap" this slightly restless girl somehow ended up being a heinous pirate, a crew member of the "Phantom”…!? Blood will race, set sail on a love and romance adventure! Ahoy!!