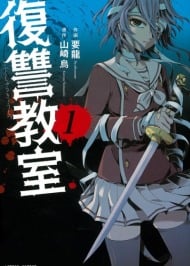 Haaaa... Now, where do I begin with this...??Story:Revenge stories are something I truly enjoy if, and only if, they are done right. The story, as the description of the manga says, is about a girl named Ayana who is bullied horribly and decided to take revenge on all of her classmates one by one. The story started pretty well and I was actually hooked in the beginning. What will Ayana do? How will she punish everyone? Alas... That didn't last for long. First of all, I thought for sure that the story is set up in high school coz of how disgusting and downright psychopaths all the students of the class were. But no! THE STORY IS ACTUALLY SET UP IN FREAKING MIDDLE SCHOOL!! So you mean to tell me that middle schoolers nowadays are psychopaths and have no qualms about rape and murder? Well ok... That fact is actually the least of the problems in the story. My main problem? THERE WERE A SHIT TON OF PLOT HOLES IN THE WHOLE STORY. The end is... very rushed, to put it mildly. So many parts of the story that were build up... So much foreshadowing and the author decided to go with the ending that made absolutely zero sense. Like please don't build a plot point if you are not even gonna explain it in the end? Not to mention *Spoilers* that somehow the people who raped a middle school girl multiple times and bullied her so much that she ended up with blood dripping off her body every day, were somehow made to be the good guys in the end? WITHOUT ANY REASON? EXCUSE ME WHAT??  Oh, and as a cherry on the top, we never really find out for sure, who actually pushed the MC in the traffic at the beginning of the story that actually led to the whole decision of her taking revenge. Now that's good writing, ain't it?  Characters:Do you like fleshed-out characters whose actions actually make sense? If the answer is yes, I will advise you to not read this story unless you feel like gouging your eyes out. Ayana, the MC, is probably the only character in the manga who I can bear and actually sympathize with. At least her actions are not without good reason (for the most part). The rest of the students on the other hand... I don't know if the school decided to put all the psychopathic problem kids in one classroom or what but not one of them acts like a human. And like I already said... the author somehow decided it was a good idea to make freaking rapists and bullies into good guys (*cough cough* Ren). I don't even want to know what was their thought process at the time. Oh and let's not forget our hero Ryou who had a very strong sense of justice but somehow never realized a girl in his class was being brutally bullied and raped (I know man... There's just too much fxcking rape). *Spoilers* That girl being a person he supposedly liked. Well to be fair, he did have the potential to be a better character but the author just did him dirty and never decided to flesh out his character more.Art:The art is the only redeeming factor of this manga. The artist did an amazing job of drawing all the revenge scenes and murders. Unfortunately, it wasn't enough to save the fuckfest of the story. I hope they get a better story next time.All in all, I had expectations from this manga in the beginning but the author just went sike and crushed all of them. So, is it worth reading? Well, you probably already got a gist of what I think from my review and yes the story is garbage. But it's pretty short and I read everything in one sitting (I know, I should get a medal or something). So if you like to torture yourself and want to read a story whose ending will leave you screaming in agony, well this manga may be a match made in heaven for you.

(read until chapter 19, couldn't find chapter 20) Ok so this manga is so fucking dark, this is the darkest manga I have read (havent read that many), the story is basically the mc (Fujisawa or something) was getting bullied end then started getting revenge on her classmates (all of them), the characters are ok, and the art is the usual. So basically this is a very, VERY dark manga I honestly thought I would drop this manga but I actually like dark mangas like this, but this was too much, but after some time i enjoyed it the story is really good. I haven't read a manga like this.(Also i like mangas where the mc is 'evil') Edit: Saw this old review of mine and holy shit did I have grammar issues.