Alt title: Avenger's Second Lifetime Around in Another World 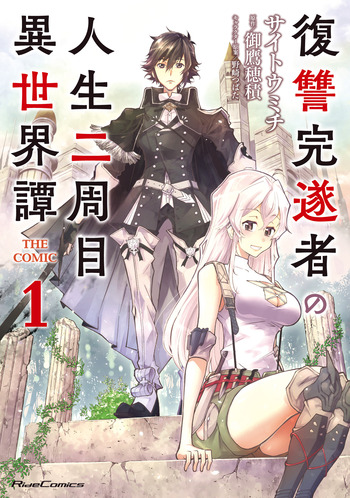 I have read the manga till the latest translated chapter honestly its not that bad as the other reviews say. It has a good story. Yea it has a dark theme but compared to the isekai's released nowadays with super op mc with sss skill and harem its way better. Never felt any cringe like some reviews here mentioned. Give it a try ts definitely an ok read. Also the art is good.

This is probably the worst manga I have read. I know that sounds overkill, but I kid you not, there was not one thing I even remotely enjoyed. After painfully reading through the first 8 chapters, half my brain cells were dead and my eyes were bleeding. The art is terrible and thats the only thing thats overkill in this review. No refinement. It looks like the illustrator used black pages and twink as a pen. There is nothing likeable about the mc and even less about his side character. I shouldn't even mention the plot. It's just a copy and paste the iskeai template - except they forgot to give the characters personalities. Maybe I'm being a bit harsh and this manga gets better, but I think I'll go blind before that happens.

the characters are too skinny, it makes me uncomfortable, also the hole premise is mad lame. The guy decides to look for his sister who is a god, by meeting people with similar names...

*Dropped at chapter 6* The world revolves around people being reborn from their shitty lives, yet seemingly some end up as slaves. Makes fucking sense. This utter garbage makes me feel sick. Also the female companion is annoying. If I wanted to die like the MC did, I'd certainly find her annoying.

This is your typical OP MC-Isekai-Fantasy-Revenge fare, so nothing special. Its not the worst story ever, but it's below average, yet still somewhat palatable. It wasn't bad enough for me to drop the manga at least - after going thru 20+ chapters I'm now invested and want to see how it turns out.

Wow, what can I say. The character design is *bad*. The mangaka has no clue how to draw human (anime) faces, and is especially bad at drawing female faces - to the point that they're downright ugly. That said, everything else is fine, the panels are well detailed, the background and other objects are shaded well so you're not staring at bright white panels with stick figures (unlike some manga), so clearly you can see the mangaka putting some effort into the artwork. It's a pity though they haven't figured out how to do faces.

They're OK, nothing special. We have a stereotypical bad guy, the meek damsel-in-distress, OP MC who's not a total wimp and has a broody disposition.. the usual cliché stuff. That said, MC isn't a total idiot, isn't super OP and is tolerable.

Overall, its worth a read only if you're scraping at the bottom of the Isekai barrel and have run out of stuff to read. It's not a particularly memorable Isekai manga, but it's not the worst I've read either. My score would've definitely been a bit higher (probably 5/10), if the artwork was a bit better.