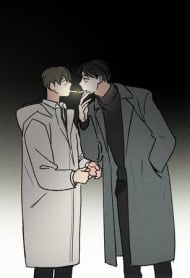 Not the best. Pretty rough around the edges. Normally, I'd drop this type of story from chapter 1 but I got hooked with the threesome concept lmao. Well even that wasn't done well. The only reason I continued reading on until chapter 47 was because I liked the cute blonde guy, but he main character and his attitude just didn't sit well with me, maybe that's just because I read this after 'Never Understand' where the main character had great morales and was resilient af. Anyways, when the *SPOILER* protagonist in this story started becoming irrational by planning this revenge plot agaisnt the main lead, I got turned off. The main lead doesn't deserve it.  Had potential, but was wasted.

This was such a disappointing read, because I saw a lot of potential within the first few chapters. The art isn't anything new or especially captivating, but it was nice enough to reel me in, along with the premise of the story. I mean, a famous actor wanting the main character to film him having sex seems like a nice and interesting story, filled with lots of drama and possible romance. And we got that...but not in the right way.  I think the best part about this story is the dialogue. I thought it flowed nicely and never felt out of place. It was great. I also thought that the characters were well-written, to a certain extent. Jisuh did some things in the story that definitely didn't make sense, given his backstory with past relationships, and it confused me as to why he would say or do certain things. Jisuh's ex-boyfriend was beautifully written, in my opinion, during Jisuh's backstory episode (that episode is one of my favorites). And although he doesn't make many actual appearances after that, his character continued to stick with me. Sun-yool's character was actually intriguing, and although he was very annoying at times, he was my favorite character out of the bunch.  Now, Hee-Jae's character. I'm not completely sure if we were supposed to like him in the beginning and then gradually see the "real" him, and then like him...again, but I didn't like him throughout the entire thing. I think the author wanted to make his character do too many things and be too many things, and it just didn't work. His character is more confusing to me than anything else. I did thoroughly enjoy his "backstory" episode with his sister, the one where they were playing cards together (that was also another favorite of mine), though. I absolutely loved the dialogue in that episode.  I'm saying all of this to say that I'm not sure character writing (at least for characters that play larger roles) and relationship building is this author's strong suit. As mentioned before, Jisuh would do a lot of things that didn't make complete sense, given his backstory and his established character. I also think that the relationships in this story developed a little too fast for my liking (I'm mainly talking about Sun-yool liking Jisuh all of a sudden and Jisuh falling in love with Hee-Jae). Now, the plot. The plot seemed to be going somewhere. I geninuely believed that this story would become a favorite of mine, but that did not happen. Towards the end of the story, the plot just became a Lifetime movie. And if you've seen ANY lifetime movie ever, you'll know exactly what I mean. It quickly turned into a...thriller? And then back to a regular romance? I really don't know. All I have to say was that I became more and more disinterested as the chapters went along, and I started skimming. Lastly, I really want to talk about the ending. It was terrible. Incoming spoilers............................So you get back together with the person who mentally exhausted you, used you for his own gain, and paid your manipulative ex-boyfriend (the one he only knew about because he stalked you, bascially) to come back into your life to mess with you again? This is one of the things that made absolutely no sense when it came to Jisuh's character. This is just his last relationship, but ten times worse. And I would've been fine with this ended if this story wasn't supposed to be a romance. If this was a story about someone being slowly mentally drained to the last drop by someone they loved and ended up staying with them in the end because they have no one left, or something like that, I would've loved this, not gonna lie.  But it's not that. This is not that kind of story, so the ending was bad. What kind of message does this send to readers? "Even if someone does something completely disgusting and terrible, you should forgive them because they changed"? Yeah, don't read this.  *I will admit, though, chapter 53 was cute, but it shouldn't be because, once again, this relationship is not healthy and never will be*

Honestly I wouldnt mind if the "you know what involving 3 blokes" was taken seriously because the character development in this was good enough and like I felt it would potentially be a pretty decent poly relationship Yaoi story! Instead they used the usual damn love triangle tag that's constantly used a lot. Regardless of my usual complaint when it comes to love triangle Yaoi stuff, it was a good story to binge on! 18+ only folks! From Points of Three: Side Story