From Far Away - Reviews 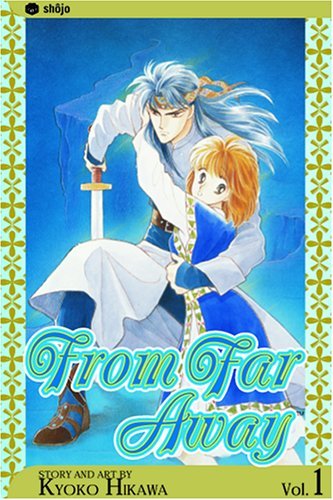 Okay, so...if you're very into shoujo, this is the perfect manga for you.  It has everything a good shoujo manga needs.  A cute girl with good intentions who happens to have some kind of supernatural power + a handsome hero who is super strong with a heart of gold + a villain who is trying to keep them apart = perfect shoujo ever.  All it's missing is a love triangle, but I'm really glad it didn't have that...

The story of From Far Away/Kanata Kara follows young Noriko, a high school girl who is mysteriously transported to a magical land. She is thrown into the arms of Izark, a handsome stranger who, for whatever reason, decides to take care of her and keep her safe.  Meanwhile, tales of a supposed Sky Demon and Awakening follow them as they travel and the world she's been transported to is thrown into deeper and deeper chaos as the world awaits for this Sky Demon to take over.

It's a typical shoujo, no?  The story reminds me a lot of something like Red River or Fushigi Yuugi...definitely check out this manga if you're into either of those manga because this will be right up your alley.  There's not much that makes this stand out from either of the two manga mentioned above or any other manga in this genre, but it was still a decent read. There were a few times I found myself wanting to roll my eyes or just feeling as if I was being oversaturated with Noriko's goodness or Izark's nobleness, but, honestly, that's just because shoujo isn't always for me.  I read this as a reprieve because I just finished Monster not too long ago and I needed something light-hearted to lift my spirits.  This did not disappoint.  Even though it was a 6/10 for me, personally, it is very much a product of its genre.

The art is very nice, very pretty, which is to be expected of the genre.  The men are quite handsome and the girls are very cute.  One thing I really liked that the mangaka did was to create some characters who weren't what would be considered "attractive" in the eyes of society and to make them the good guys.  A lot of times in shoujo, the bad guys are always "ugly" and the good guys are "beautiful," but this artist decided to do it the opposite way around.  It was very much a breath of fresh air.

The characters were nothing noteworthy, but still entertaining.  You have the main characters which I mentioned above, and then, of course, you have to have an entourage.  All good manga have some kind of entourage of crazy characters and this manga did not disappoint in that regard.  I especially loved the characters who started off evil and then made their way to the other side and fought for good.  Very, very cool.  I wasn't the biggest fan of the main characters, but I didn't dislike them.  I really like that the mangaka decided to make Izark, the hero, someone relatable and sympathetic.  Quite often, heroes in series like these are untouchable and stoic, but he wasn't.  Once again, a nice breath of fresh air.

Overall, this manga was not a waste of time, in my opinion.  It's not a genre I typically enjoy, but I didn't hate it.  There were cheesy moments, sure, but the ending was kind of heartwarming and the overall theme of redemption was really beautiful.  I don't think I'd ever recommend this to someone who isn't into shoujo - it wasn't quite that good - but I would definitely recommend it to those who love shoujo.  You will get an absolute kick out of this! 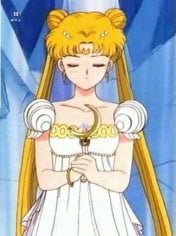 While transported to an unfamiliar world, Noriko has to learn the language and learn the ways of the new world. I found this very similar to Red River, where the main character is transported to a new world, where they meet the person they want to stay with. I really enjoyed this manga because Noriko shows a kind of strength you don't expect to see from someone in her situation. Reaching the end of the manga, I felt like I'd entered the light (you'll understand when you read to there) and I learned so much at the end! I truly felt refreshed from this manga and loved the ending and epilogue! If you are looking for a nice romantic fantasy manga, I think you should give this one a try.

From Far Away (Or, Kanata Kara, if you prefer) was exactly what I expected it to be. Schoolgirl ends up in a strange world not knowing why or how she gets there. Man appears. They become companions. Great battle occurs. That alone, is extremely ordinary.

Although it was rather predictable at times, it was charming, and sweet. The art is absolutely beautiful, and the backgrounds were not lacking. The story had it's own unique little twists, and although I knew how it would end, (Good trumps evil, yada yada yada), I throughly enjoyed the ride until the very end.

If you're on the fence about reading this, I suggest that you do. I loved how the relationship between Noriko and Izark expanded throughout the books, and I found it fun, and endearing. All of the characters keep inside their boxes for the most part, but I think it's better that way, since at times, there were so many of them.

I'm rating it 8/10 overall, because I've read better, but not all of those had me hooked from the start, as Kanata Kara did.

I've read this like 6 times and I still can't get enough. This is peak Romance. The highest that a manga can hope to achieve. I find very few at the same level. 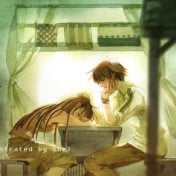 Story had me hooked, but very predictable. I did enjoy how people who 'seemed evil' were always evil in the end. Wished for more relationship building between Izark and Noriko