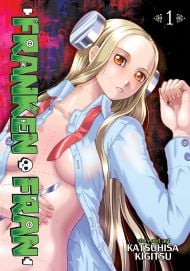 Franken Fran, creation of the absent Professor Madaraki, has a true gift when it comes to the scalpel: she can give you the perfect body, bring the dead to life or stitch people together so that they will never again be apart. Join Fran and her boy-headed cat as they learn about the human soul while carving up the human flesh. But ethics aside, can something beautiful come out of such ugly work, or is it doomed to remain ugly until the end? On the other hand, does it matter?

Franken Fran was a series that got me a bit curious about it when I first read a bit of it off Mangahere. I bought my own copies of the series when I  had the chance and now that I've finished it, its time to share my own thoughts about the series. Story- The series itself is told through the many episodic chapters where Fran is helping one of her patients. Just to make a point, Franken Fran is a gory and dark series, whether it is the bodies Fran operates on, or the violence in which characters lose their limbs or other horrible things happen. For a shonen series it also manages to cover some of those mature themes found in seinen series too. A lot of the stories focus on Fran's experiments that don't always end well, but there are some that end on a happy note. There is some consistancy in the chapters, although there is no greater plot throughout the series. The problem with short stories is that they are too short and not enough to elaborate on. However in this case it was okay, given the pacing of the stories and the fact that they were all interesting.  Art-  The art has always been pretty stable and good looking, even during the gore scenes. And the designs for the main characters and the monsters are also good, however, the eyes of a lot of the characters look the same and there isn't a lot of variety with the facial expressions. But for the most part looked good, or creepy depending on the situation. Characters- A lot of the main characters don't have much of a background, other than the fact that they are all somehow related to the professor who SPOILER never actually appears in the series but that's basically all we know about them. Still, there are lots of loveable characters in the main cast. For the "guest appearances" we have really stupid/annoying characters, weirdos, nice people, idiots,... There is a huge variety of characters, which is nice, but because these are short stories we don't get to know that much about them. Overall- Franken Fran is a really dark/twisted, with a lot of gore, which can at times be weird, but its not that weird in comparison to other series. I would exactly call it a must-read but it is a good read, even more so if you're a fan of horror like me. Definitely something to read while eating ;D

This was definitely a very weird manga, which I started reading because I saw someone talk about it on the forums. There are warnings for the gore in this manga, but I don't particularly mind gore-scenes. What does make my stomach get upset is some of the twisted things that happen in these stories (yes, stories. It's really a collection of short stories, that are mostly unrelated). So the manga follows Fran Madaraki, a girl that has been altered by professor Madaraki, and who has some impossible medical skills. She can turn you into anything you want (or don't want), raise the dead, switch heads, switch brains, and much more. The entire series depicts her experiments ("for the glory of science"), most of which don't end too well. There are some nice endings too though. My main issue is that, although there is some consistency in the chapters, and some characters return for a second or even a third chapter, there is no real greater plot. I mainly like episodic manga less because most short stories are, well, too short and thus not elaborate enough. In this case it was quite OK for my tastes though:the pacing of the stories was good, and they were all interesting.story 8/10 (although varying between 5/10 and 9/10, I'd give it an overall score of 8/10) The artwork always looked really nice, especially for gorescenes. I also like the characterdesigns for the main cast and the "monsters", but 1 problem is (as Brainblow indicated in his review) that the eyes of lots of characters are the same, and that there aren't all that much different facial expressions. Still, it all looked nice (or creepy, depending on the circumstances). art 8.5/10 The characters-section also feels somewhat lacking, as most main characters have almost no background. We know that they're all somehow related to the professor (who never actually appears), but that's all we know about them. Still, there are lots of loveable characters in the main cast. For the "guest appearances" we have really stupid/annoying characters, weirdos, nice people, idiots,... There is a huge variety of characters, which is nice, but because these are short stories we don't get to know that much about them. characters 7/10 Overall: This is a really dark/twisted manga, with a lot of gore and other weird scenes. I wouldn't call it a must-read, but it's a good read. Definitely something to read while eating ;D

Honestly if you really need a shock horror manga to make your stomach queasy, this is one of them! My god the amount of blood, gore, murder, you name it that Ms Fran herself tries to help out different unfortunate souls within each chapter, is definitely not family friendly!  I gotta say, I really admire Fran, Gavril, Veronica, Okita and Adorea as characters because they just have their own uniqueness. Our main gal Fran is a really smart doctor who just wants to fix others and her nice laid back attitude makes her pretty likeable. Gavril is like a pretty cheeky villain who has no filter, pretty hot tempered but a badass. Veronica is a cute shy young girl but she doesn't take any crap either. It's hard to believe that these three girls are sisters x)  Anyways with Adorea, she's pretty much a useful mummy that helps out with Fran and the gang when they are in deep s*it by transforming as a monster (Gavril does this too). I honestly can't remember why she turned into a mummy in the first place but yeah, she's a badass like the rest of em! Finally with Okita, yeah nothing much about him but he's a good looking chap in a dog body....yeah I'm not kidding...his body is a dog body folks. PS I totally ship him and Fran together omg 😍 This story for me was really enjoyable for the 61 chapters that makes me appalled the author even more for making it an addicting horrific read! Although we did experience an abrupt ending, at least this story is continuing by having a sequel! I'll have to check it soon ^^ 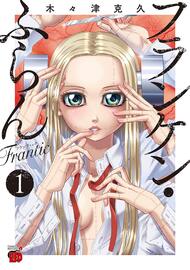