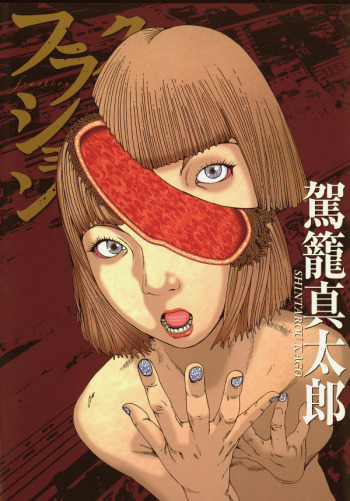 Even though the story is definitely original in the way it is told, it is not well executed. The main story (fraction) progresses parallel to an interview with the actor (the parallel story), which at first glance may seem unrelated, but as the story progresses, it becomes clear that these parallel stories with the author have a deep connection with the main story, which makes for some interesting storytelling. However, the main story is not enjoyable and the way it is told is crude and uninteresting. The parallel story with the author is verbose and boring, save for a few interesting ideas here and there. The resolution of both stories is also unsatisfying and makes both of them worse. The art is also poor, using wide lens for close-up shots (possibly purposely) which creates distorted face images. It appears as though the author traced photos to achieve this "effect" and the overall art feels artificial and motionless. Actually, to be real, the whole thing looks traced, even the ''normal'' faces. There are also barely any backgrounds drawn, everything is just floating in white. The characters are also not likable.  In conclusion, the only reason to read this story is for the plot the author created with the parallel stories.

The other stories in the volume are not even worth mentioned, one feels like a Junji Ito story, the rest are laughable at the best.

Trigger Warnings: NSFW images; sexual assault (frankly, if you have any triggers with NSFW at all, I'd recommend avoiding this completely); emetophobia

After a reading many of Junji Ito's works in the ero-guro category of manga, I decided rather than binging all his works in one, I'd also check out another highly recommended mangaka - Shintaro Kago. Reading through what works were available on the website I use, I decided to start off with Fraction after having seen some intriguing artwork from the specific manga upon Google Image searching his name.

The first story in this is definitely what I expect from ero-guro artists this early into reading them. It's gory, it's messed up but it's also extremely clever in the way that Kago creates his world. The author even explains as he goes along how the manga is created, the tricks they are using to twist your mind and for them to see what they want you to see, but even still twists and turns fill the pages, making you question everything when you come to the end. It's an extremely clever use of literacy illusion throughout the manga.
With a well thought out storyline, causing you to question everything you first believe in when it begins, Fraction is, I would say, a small work of art. It definitely only gives you a fraction of what to expect and it's amazing in the way it does that.

The two extra stories - they don't quite hold up to the same content quality. The first one - Tremors is relatively boring. For a piece of work in a horror collection, I don't expect to come across something that's basically science fiction. Reading it was intriguing, but the story offered nothing much past what was happening on the pages. There was nothing explained, just people vibrating. It is an interesting concept but for how much was contained in the story, it just didn't get the justice it could have were it longer or a full manga.

The second one, however, was much more into the ero-guro style, and much more graphic. Returning to horror imagery that makes you curl your toes and itch at your skin, Voracious Itches is a story that some bug haters should probably avoid. This story finishes the collection in true guro violence and a story that has definitely left my skin positively crawling.

All in all, if you're gonna read this, I kinda recommend dropping the middle story out. It's not so much in guro style and was interesting but then boring as it gave us nothing past the mystery on the page - which was a shame. However, the main story and second short story were spectacular in their own ways and are definitely worth the read if you're a horror manga fan.