Forbidden Roommate: How to Manage a Lustful Idol - Recommendations 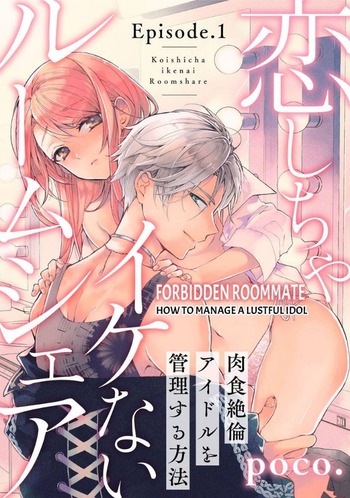 If you're looking for manga similar to Forbidden Roommate: How to Manage a Lustful Idol, you might like these titles.

Don't Expose My Dark Past! An Elite Businessman and a Former Idol

Miyu Tachibana is a former idol. Since her days of stardom, she has put on weight, cut her long, silky hair, and hidden herself behind a pair of black, thick-rimmed glasses. What's more, the screw manufacturer she now works for is struggling to stay in business. One day, Miyu encounters a new potential client representative by the name of Mr. Shiga. An elite businessman, Shiga seems calm and collected at first, but his angry stare and odd conduct seem to suggest there might be more to him. When another client representative discovers Miyu's former identity, he tries coercing her into the bedroom. His plans are dashed, however, when Shiga steps in to protect Miyu. But then, shortly after saving her, he pushes her down on the bed and says "If you can do it with a guy like that, then surely you can do it with me!" Could it be that Shiga has a hidden past of his own...!?

Tomo, Niina and Megu are three high schoolers who're determined to become idols. Is it because they want to bring joy to young women all over the country? Because they dream of being top singers and actors one day? It's nothing so pure or so ambitious...These boys just want to get laid! But to that end, it's necessary to beat all the "real" idols out there and rise to the top in terms of popularity. So they enter "Maji Kou," short for Majima Kita All-Boys High School... And all hell breaks lose!

Ninagawa Mio is a tough biker-gang "yankee" girl. One day, while rescuing a child from an oncoming bus, she accidentally crashes her motorbike into a very expensive car. To make up for it, the owner Saga demands she come to meet him alone. Mio has no idea what to expect at this meeting, and is bewildered when she finds herself entered into some contest called "Dorukon."

"Do a story on Cole Adams, the music producer." Lauren, a music reporter, couldn't believe her ears when the boss gave her the assignment. "It may be my job, but I have to do a story on the ex-boyfriend with whom I ended so badly?" Lauren diligently waits at the Grammy Awards for Cole to show up. When he does, Cole sweeps her away in his car! "I'm glad to see you again, Lauren." Why does he smile at her as if nothing has changed? Is this reunion "the start of something new"?