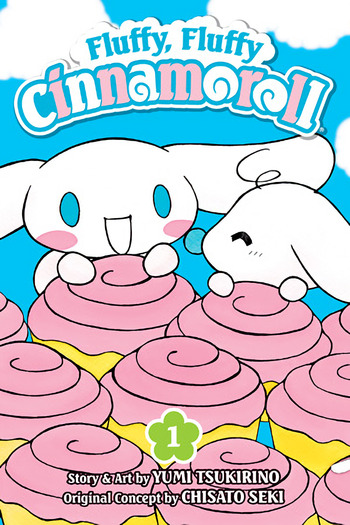 Deep in the Crescent Forest, numerous woodland creatures work, play, and have plenty of fun in the process. Clover the bunny, along with Mallow, Kale, Shallot, Blackberry and even a flying tree squirrel named Hickory always find themselves in a variety of adventures. Whether it's investigating a cursed spring to chatting with a seasoned traveler, there's always a good time to be had in the Crescent Forest!

Because it also has little furry creatures and is also related to The sanrio franchise, unlike Happy Happy Clover. It is a 4 koma (4 panel) manga with character introductions and full color pages in the beginning of the manga. It surrounds Cinnamoroll and his friends. It's a very cute manga and is recommended for all ages. I read it and it was enjoyable, but I liked Happy Happy Clover better mainly because it was a bit more intresitint and Fluffy, Fluffy Cinamoroll was mainly just about  little problems that the animals would solve.

Hasegawa Kouta, 17 years old, is a second-year high school student. His days are unremarkable and average when Kouta meets Mizuno Yuu, Yoshino Shunsuke, Nishimiya Ryo, and Minamoto Seiichiro, who are fellow students attending Hijirikawa High School. In an instant, Kouta's average life begins to be awash with sparkling light. A tale of a sparkling youth and his encounter with the Sanrio Boys. Our story begins.

Wansa-kun, is a puppy who was sold for pittance and escapes. He spends the series searching for his mother.

The protagonist adores dogs, and one day is given a magic wand to turn people into dogs.

The Hino family picks up their "little brother" from the airport. The "brother" turns out to be Rilienthal, an intelligent dog who speaks Japanese. He is also the target of men in black suit from a mysterious organization. They refer him as RD-1.