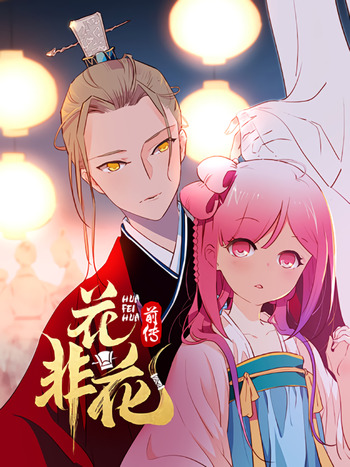 I was a cruel empress who had the world in my hands, forcing commoner men to become my concubines, finally got what I deserved. The people I once knew became my enemies, and somehow ended up in the "enemies" hands?

He is a small country’s crown prince; born in the cracks of privilege, maturing on a bloody path, duty-bound to never turn back, to continue forward on his king’s road with hardships beyond compare. She is the daughter of a sinner who had fled the city, who slowly changed her role as she grew up. Was this pushed forth by fate, or caused by human nature? During troubled times, the predestined man and woman met, mutually fell in love, oppressed, and killed. Is this a choice between love and virtue, or is it up to fate to decide? In this feast of kings, who exactly is the victor?

Next to the Prince

Heartache, competition, and the behind the scenes battles of the imperial harem; an ancient story based upon revenge.

The Empress Regnant and Her Knight

Being the only heir for the throne, I became the first queen in history! To awe all the civilian and military officers at court as well as the women in the imperial harems, my father taught me bloody and violent methods to control the country, as a result, I was gradually described as the first tyrant in history. Luckily, there is an acting king who can not only take the blame for me, but also frighten the royal court!

A 21st century forensic doctor somehow traveled back to ancient China and became a princess. What’s better is her first treatment was rather intimate.

Xie Yan, the spoiled daughter of a general, lost her parents overnight, yet because of her family status, was involved in an “emperor-minister political struggle” in the royal court. At the young age of 7, she was sent to the emperor’s harem, and became the “young empress” in name only. Can the young orphan single-handedly stir up a storm in the turbulent palace?

A Song of Prosperity

An intelligent and domineering woman encounters a carefree, flamboyant prince at a brothel. Initially, she thinks of it as nothing more than a chance meeting, but little did she know their fates would end up being so deeply intertwined... "If you hold no love for me, then I will give up my love for you as well."

Banished into the Cold Palace, robbed of her newborn daughter, stripped of her status... She wants to avenge her husband now that she’s lost everything. She is his Queen, but she is also the one person that he wants to get rid of the most. She’s his disgrace and he’s her grudge. She rises like a phoenix from the ashes, renounces herself from love and returns full of hatred. After a few battles she says with a smile: “Only one more step. Sadly, you’ve fallen in love with me!” After several showdowns he says in an angered tone: “Even in hell I want you to stay with me!”