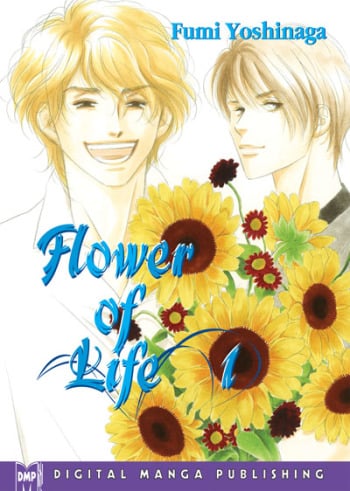 Tachibana is an heir to a huge and successful corporation. He can speak five languages, play musical instruments, and has even passed the bar exam, so naturally he's now... running a bakery?! At the Antique Bakery, Ono, known as the ‘Gay of demonic charm' is serves as the head patissier; ex-boxing pro Eiji works as Ono's apprentice; and Tachibana's bumbling henchman and shadow, Chikage, helps out to the best of his rather limited abilities. As a carefree ladies man, Tachibana is always ready to turn on the charm if it means getting a sale, though aside from his love of women, no one really knows why the grandson of a successful businessman would suddenly decide to open a bakery. Could a traumatic event in Tachibana's past have anything to do with why he set up shop?

Of all Fumi Yoshinaga's manga, these two seem the most similar. Both are about a group of people and their everyday lives, and are full of engaging banter, interesting characters, and light drama. Both have a sort of cute, airy atmosphere, and make for pleasant mostly-light reading.

Both of these shoujo manga revolve around a group of friends/classmates and their families/teachers, and have a similar blend of lighthearted fun and character drama. The cast of each is the selling point- unlike most high school-oriented manga, you're not going to run into carbon copies of these characters elsewhere, they all feel fresh and well-rounded.

New shoujo manga artist Nana Futami works hard every day while being supported by Kaede Satou, her female editor who is older than her, and Mizuki Hazama, her assistant. According to the girl herself, she sometimes drums up intense daydream delusions of occupational illness!

Two editors are fighting to get Inawashiro-sensei to finish his manga in time, but a possible romance sparks between the two editors. What will become of them?

Since the age of three, Kaho has been drawing manga. Her dream was to debut as a manga author before she graduated high school. She posts her first manga to the publisher at the age of 17, but her first editor has a shocking proposal: "Sleep with me, and you'll debut."

The young manga artist Futaba has a passion for her characters, but the readers aren’t loving them. When she finds out that her manga has been cancelled, her passion for her work inspires Akimoto to take over as her editor. With his hand to guide her, can Futaba find her footing?

Kaoruko Moeta is a 15-year-old high school student and manga creator who uses the pen name Chaos. After ranking at the bottom of a reader survey, Kaoruko's editor recommends that she enter an all-female dormitory for manga creators. Kaoruko's roommates are shoujo manga creator Koyume Koizuka, teen romance manga creator Ruki Irokawa, and shounen manga creator Tsubasa Katsuki. The girls support each other as they work to become better manga creators.

Kanna Tezuka is a serious 15-year-old manga artist already being published as a pro. So when she finds out her high school is starting a manga drawing course, even she gets excited. But it's a fiasco! The teacher is useless, and the only other students—three pretty-boy artist wannabes—quickly adopt Kanna as their (unwilling) sensei. But they all have ridiculous delusions about being an artist, and if Kanna can't bring them back down to Earth, she'll never get any work done!