Fireworks, Should We See It from the Side or the Bottom? (Light Novel) - Recommendations 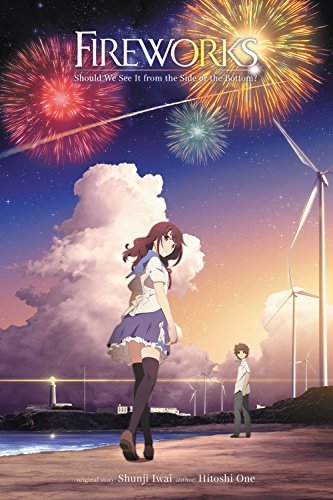 If you're looking for manga similar to Fireworks, Should We See It from the Side or the Bottom? (Light Novel), you might like these titles.

Japanese high school student Hodaka, runs away from his remote island home to Tokyo the summer of his freshman year. He quickly finds himself pushed to his financial and personal limits, the unusually rainy weather seeming to suggest a gloomy future. He lives his days in isolation but finally finds work as a writer for a mysterious occult magazine. Then one day, Hodaka meets Hina on a busy street corner. This bright and strong-willed girl possesses a strange and wonderful ability—the power to stop the rain and clear the sky.

A life spent in a hospital...until one day, a meteor show blazes by. Who is this mysterious boy, Elnath, who searches for Potentiary Crystals, and what do they have to do with the fate of people? New encounters bring with them new experiences, but also new truths from which to flee. And what to do, with these magical girls that know no care?

The daughter of a glass artisan family, Fukami Touko, spends relaxed days at a cafe called "Kazemichi" at a friend's house. On the summer vacation of her third year in high school. In front of them appeared a transfer student boy: Okikura Kakeru. He told Touko that he can hear the voices of the future. If someone knew in advance what their future would look like, what would they wish for? While feeling never-before-felt tremors in herself, Touko realises that she has started getting a feeling in her heart which she can't leave alone...

Mitsuha is a young girl living in a rural town named Itomori and is fed up with her life. One day, her family and friends notice she's suddenly acting strange. Little do they know, a high school boy from Tokyo named Taki Tachibana found himself randomly switching places with her when he fell asleep. But he has no clue how to act as a high school girl in an unfamiliar place! This is the story of your name. from the perspective of Mitsuha's friends and family as they deal with her strange new quirks--and avoid disaster.