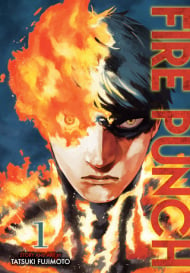 Fire Punch is a manga about a boy, named Agni, with powerful regenerative powers who gets set on fire by fire that can't be put out unless its target gets reduced to ash. So Agni gets stuck in a painful cycle of regenaration and burning. He gets used to this pain and swears revenge, against the man who burned him and his village but most importantly, against the man who killed his sister. However as the story progresses Agni does atrocious things and the line between the protagonist and antagonist of the story blurs.  Fire Punch is a good read because: Cool fire man punches people. The art style is great. Cool fire man stops punching people and questions his existence. The series discusses some serious topics such as why Agni continues living despite being in so much physical and mental pain. Funni penis jokes. Dark universe showing how humans behave in a hypothetical situation (An icy version of the earth filled with people with 'blessings') which challenges their survival skills and questions their morals.