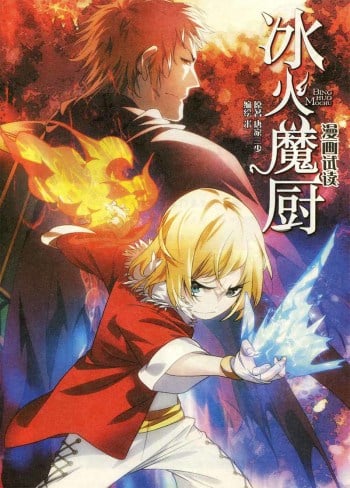 Just a heads up this manhua gets updated extremely slowly in case you couldn't tell by there being 24 chapters in 3 years. The author is writing 6 manhua and 1 light novel currently, and this one appears to be the ugly child of his flock.

I would recommend reading his other works before this one. Not because this one is in anyway bad, it's actually quite good but the odds of this getting updated anytime in the near future or with any consistency is slim to none. If you really like his style I recommend his other manhua and light novels more as they get regular updates and attention from him.

Edit: Just as an added note, ten more chapters are listed to be added. Some sites says it's Bing Huo Mo Chu 2 ch1-10, some say it's simply a continuation in case you can't find it from searching. Also be prepared because the change from chapter 25 on or as the second season is jarring. It's obviously done by a completely new artist with a much higher focus on detail. Basically every character other than the main character look quite different to the point that some don't even look like the same person.

Well Jia San Shao TANG is at it again with another manga that just will not be completed anytime soon 36 chapters in 4 years(like Carreau mentioned as well), are you serious I know you have other mangas to focus on but again focus on one at a time I know you have light novels and other mangas and other things that you want to do but come on dude don't have 20 concurrently running mangas together and leaving them all incomplete, just finish one of them then start on the next, so on, and so forth until you're finished. Don't have these long drawn-out series of people actually like, like this one, and just continue to focus on one after another.

This actually came out to a 6.96 but i always round up just to be fair. Unfortunately for me reading his other series first has actually destroyed the good that this series can provide, it does the same thing as the other series of his where they just jump from time to time doing some sort of time skip. Again, this is just another story of revenge where his protagonist is trying to down the big old bad government / religious organization. His father left him when he was 8 for whatever reason he fell into a river drowning or some bullshit where he gets saved by some old dude who tries to brainwash him into becoming his apprentice because his magic is so damn strong it doesn't actually work though he plays along to actually be his apprentice for whatever reason he learns how to be a chef the old guy wanted him to learn. Why? who knows he just does and then he practices magic at the same time Fire and Ice somehow are incompatible but yet he can use both of them same time without dying even though he's only been doing this for 3 to 5 years. Ten years later he goes to the city trying to learn how to be a better chef but gets relegated to be a wood chopper and then he goes to a Mage Guild to try and see if he can get in and he is a magically high level wizard/sorcerer the fuck ever magical dude who super high class bullshit. It's just another series where the main character is extremely overpowered and he can learn faster than anybody else ever in history of forever and is now slumming it with the lowlifes and taking names and that's why I gave it a low score exactly like his other stories. Pretty much the same damn thing i gave him a pass on Douluo Dalu series as it's the same world but spread over 3 series even though it hasn't ended yet. I would still recommend reading this it is actually okay but like I said the other series ruined it because it's just a reiteration of what I already read, a one-time read and then you're good to go.