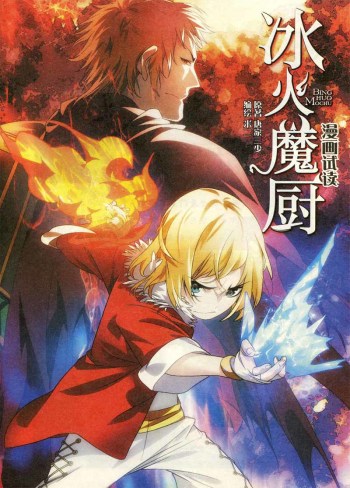 Follows the same line of "training" that these types of mahua have being where they train their ki and become better people or stronger people at the end of it. The manhua isnt pretty far at the moment so this is a vague comparison of the two series.

Please make it anime so i can watch it always.

And the boy had an extremly so awsome so that i can enjoy of reading it.

Kang Minhyuk suffers from a rare disorder that makes it impossible for him to stop eating. Despite strict diet and exercise, Minhyuk’s weight is now life-threatening. As a last resort, his doctor recommends a unique treatment—Athenae, a VR game where one can eat as much as they want without consequence. Crispy fried chicken! Scrumptious samgyetang! Inside Athenae, all food tastes real, but earning it is no cakewalk. In order to live, Minhyuk must go on the ultimate fantasy gourmet adventure!

Both of them have an mc who is really good at cooking and how they become stronger and make new friends while they try to fulill their main aim which is cooking (and eating) different things.

While Leveling Up, by Only Eating! is in a game, Fire-and-Ice Magic Cookery is in a fantasy world. both involve magic or having powers.

He woke up in a familiar world that had vastly changed. His familiar school had become a mystical school that teaches magic, encouraging everyone to become a mighty magician. Outside the city, many wandering magical beasts and monsters attacked and preyed on humans. His world of advanced science changed into one that praised magic. Despite this, his ambition in life, and his social status remained the same; one of the dregs of the society with a struggling father and a disabled step sister that couldn’t walk. However, Mo Fan found that when most people could only practice a single major element of magic, he was a Versatile Mage!

Umi, Hikaru, and Fuu have returned to Earth from Cephiro, but all three know they have been forever changed by their adventures there. Haunted by the decisions they made and the unresolved war between Zagato and Emeraude, the Magic Knights journey to Cephiro once more, this time with a sense of duty. But who was it that had the strength of heart to summon them again, if it wasn''t the Princess Emeraude? Is it the person who, as Clef says, could replace her as the Pillar of Cephiro?

Hikaru, Umi, and Fuu are Tokyo schoolgirls with nothing else in common, until one fateful day at Tokyo Tower changes everything: the three are transported to the magical realm of Cephiro, and find that their fates are inexorably intertwined. The sinister Zagato has kidnapped Princess Emeraude, whose will power keeps Cephiro safe, and the three girls are told that they must become the legendary Magic Knights in order to save her. This task will be difficult and dangerous, as Zagato has sent his most powerful minions to stop the girls before they can fulfill their destinies. Protected by an ancient wizard's blessing and determined to find their way home, Hikaru, Umi, and Fuu set out on the adventure of a lifetime