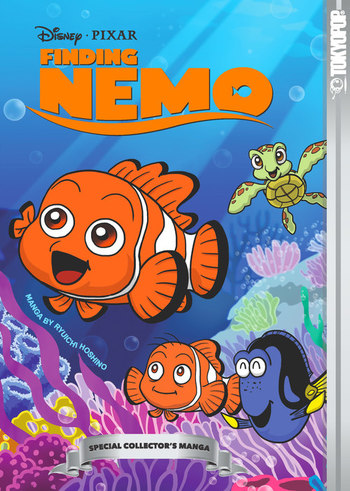 This is a manga retelling of the Finding Nemo movie. It shortens some scenes (though I don't think it fully drops any) and focuses on just getting across all the important plot points. It doesn't add any of its own takes on the story. I think some of the appeal and nuances are lost in this telling though, and possibly some of the character development. With Dory's character specifically, I think a lot of feir endearing-ness is lost without the voice acting and without that memorable "Just keep swimming" ditty. The plotline consists of two threads: the adventures the father experiences while traversing the ocean (basically just one heart-pumping encounter after another) and the attempts by Nemo and feir comrades to escape from the fish tank. There are definite plot armor conveniences that allow for the impossible task of tracking an individual fish down to suddenly become possible, and I sorta cringe at how railroaded the plot is because of that. But it's a children's story, so what can you expect. In a sense, I appreciate how they had Nemo gain self-confidence and learn that fe can do things if fe puts feir mind to it, but I also find the heavy emphasis (toward the end) on that life lesson stuff to be corny. I also feel like the inclusion of Darla, while adding extra tension and a need to immediately escape, could have been done without. Likewise with a lot of the extra drama in the final parts of the story.

The artwork is derpy and the characters don't look cute, in my opinion. And honestly, the unimpressive artwork is probably the main reason I would recommend that people watch the movie instead of reading this. At the very least, I remember enjoying the movie a lot more than I enjoyed this (though keep in mind that it's been quite a few years since I last saw the movie).