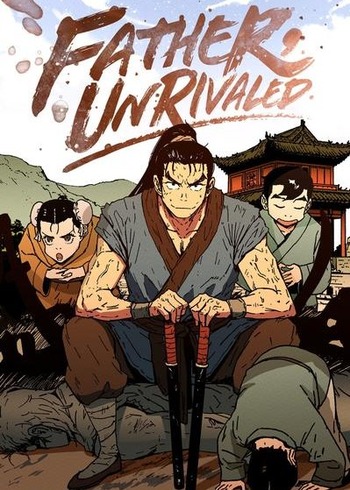 Peerless Dad is a rather unique series, as far as Asian martial arts stories are concerned. Mainly because of something you see in the title: our MC, the warrior Noh, is a dad! Well, at least he is for all of the series except the first chapter. Another thing that sets this series apart is that our MC - contrary to the word Peerless in the title - isn't the strongest in the world or something. It's actually because he became disillusioned that he met his wife and became a dad in the first place. Of course, it wouldn't be a martial arts series if the dad weren't very strong though, but because of certain experiences he ends up underestimating himself. This leads to interesting fights though, especially early on in the series where the MC "fights" in a very atypical way.

Anyway, due to certain circumstances, Noh ends up having to raise his kids by himself. Which is kind of problematic, as he never had a real father figure himself and only knows how to kill people. It's interesting how he looks for solutions for all his problems, and it soon shows that Noh isn't highly intelligent, but he does have "street smarts", for lack of a better term.

While it's certainly cute to see Noh raise his kids, in between some guard duties and fighting, the kids also actually grow up and become main characters in their own parts of the story. And, to be honest, at times their story is more interesting than Noh's.

The art is pretty good too. It's full-color, and while nowhere near the level of Solo Leveling, very pleasant to look at. Especially for the most important aspects, namely fights and facial expressions, it works very well. Also, the muscles always look very impressive.

Overall: it's a very good read. While the story isn't all that complex as of now, it's very enjoyable and makes you root for the main characters. Give it a try! I would recommend trying until at least chapters 16-17, if  by then you aren't convinced it's worth reading, then it's probably just not your thing.

P.S.: For those interested, this is very vaguely related to Red Storm. However the link is so vague it doesn't matter if you read it or not, it's more like an easter egg for those who know it.

The story starts of somewhat slow, and keeps on building momentum.
Each Arc acomplish something special and makes u invest more into the characters.

The art is almost perfect and is full coloured, and the facial expresions are so good.

There's not alot to say without spoiling anything, but if u like Martial arts stories or family stories then jump right on it.
This is also one of my favorite Martial art story out there.

Overall 9/10 This story aint no copy paste, this is original and it executes the story so well.


(Also check out Red storm, which was writen by the same Author and has a similar character in both mangas.)
(sorry for any misspelings or any wrong grammars)

you'll probably forget the name of half the characters. Don't worry, it happens, I can't remember the MC's name sometimes but its really good and one reminder Its PEERLESS DAD not PEERLESS MARTIAL ARTIST🍞

This manhwa is best , just go for it.

The writing on this is a lot better than other Manwha you'll find out there, but I think it mainly excels in how it portrays its characters. I personally feel the character development is important because the children take up a large portion of the plot, and they do not skimp on this. However, the art can lack in places, and the story isn't as cohesive at times, I feel it isn't beat out correctly if you can understand. Personally, I would recommend this to anyone looking for a family development/ martial arts related manhwa. I can understand that's an underpopulated crossover, but my point being it has some good morals and overall good time if you give it time.

Overall, I'm giving this 9/10, because I think it came at a good point in my life, and also the character's faces are emotive, and the story overall is followable. I have been trudging through dirt too long, and this itself is something I'd recommend to any self discerning manwha reader.

P.S., I am also trying to be more positive in general, so keep that in mind when reading my review.