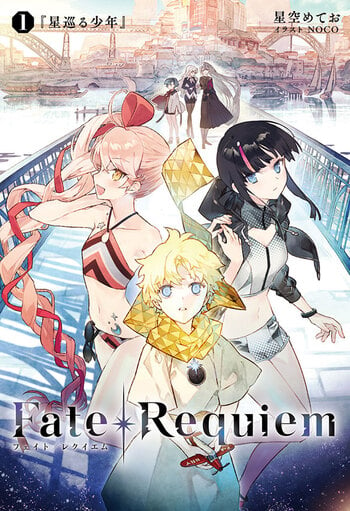 Blade of the Phantom Master

Munsu is an Angyou Onshi - an arbiter for the country of Jushin. Fighting evil is all he knows, but since Jushin has recently collapsed, what is he fighting for? Wandering from place to place, Munsu finds himself battling those who would further destabilize the country, whether they be arms dealers, smugglers, tyrants, or necromancers. Accompanied by a female warrior named Chunhyan and able to call upon the strength of a ghostly legion with his Angyou Onshi powers, Munsu sets out to help those who are willing to take a step towards helping themselves, and bring justice against all that is evil in the world.

High school life was just beginning for Yuuji Sakai, and while still growing accustomed to new classmates and teachers, a larger truth hit him. One day he found out that demons known as Guze no Tomogara were devouring human’s existence, unbeknownst to but a few. That was the day when he met Shana, a red-haired and blazing-eyed hunter of demons, and that day his life would change forever. She told him that he was just the fragment of a human, and that demons would hunt him for a strange gift he bore within him. Although discarding him as a nuisance at first, Shana comes to admire his resilience, and Yuuji finds new strength and determination. As the story unfolds, their relationship changes and both tempt their fates...

Yuma recaps the best moments of Matoi the Scared Slayer with a special appearance by one of the voice actresses!

Matoi Sumeragi works as a part-time shrine maiden at her friend, Yuma’s, family shrine. While Yuma is next in line to become the shrine maiden, Matoi is content to pursue a normal life. Unfortunately, “normal life” comes to a crashing halt when she and Yuma find the shrine damaged and Yuma’s parents wounded. Things only escalate as Yuma’s “Divine Possession” ritual aims for, not Yuma, but Matoi, imbuing her with the powers of a god in a fight against evil spirits.