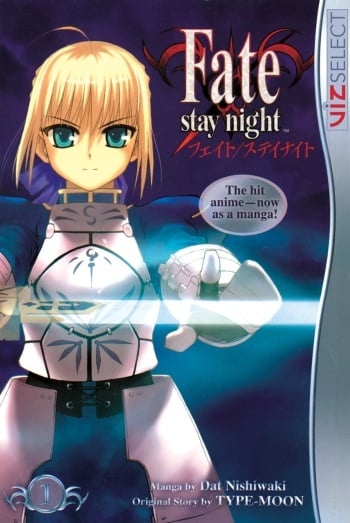 I find that the Manga is far more story intensive than the Anime (which is true in most cases). The story developments such as Saber being made a servant of Caster is a twist that never made it to the Anime, which i saw first. Other twists that I think should have made it to the Anime are:

Sakura using the last Command Spell in the Manga to make Rider save her brother Shingi Matao (following his fall off of the tower following his battle with Emiya) instead of Matao being killed off by Beserker and Illyasviel in the tower following his loss to Saber and Emiya. Although the manga is still making it to the English market, I find it more in depth and more enjoyable. A must read.

Fate Stay Night is a pretty good manga I wouldn't say it's the best it does run into some of the cliche tropes that are rampant in Shonen type mangas but it does the story pretty well. If you read online like most other people to see if a review is positive or negative about it manga you'll see that most if not all translating sites have only 65 chapters released which is unfortunate considering that the series ended 6 years ago 2018 as of me writing this. I'm not sure if the series is going to get picked back up because 6 years is quite a long time for a Hiatus for translators just to you know either put this story on the backlog likely it's been put on not going to do because people don't care about series.

So the characters are really appalling in the sense that they're assholes to be blunt, Shinji is one of them he's a total dick, Kiritsugu is also an ass and I am assuming he is the one who burned down the village and killed a lot of people 10 years ago and he felt sorry somehow for Shirou losing his family but I don't believe this is to be true, because he seems like a heartless bastard as he constantly leaves this boy he now has adopted. He goes on great adventures overseas or some bullshit and apparently he fathered a child that he didn't feel was necessary to mention to his now adopted son. The fights are mediocre at best but some of them are cool especially the berserker one that happened near the last of the translated series I mean it was pretty badass and he has to die 12 times(7 during this fight) for him not to be able to regenerate it that's kind of insane.

Caster fight was okay being able to subjugate two three maybe four other servants under herself that's pretty badass though kind of lame because then it kind of makes her OP but then again she gets her ass kicked so no not so much. Oh also that preacher Kirei who knows what's going on with that guy I got the creepo feelings from that guy since the very first appearance in the manga the first page he appears on I'm like wow this guy looks like a creepy ass typical Asian bad guy gtfo of here. I don't know how this series is going to end in the next 17 chapters if they ever come out which they probably won't but it would be cool if they did and I might update this at that time. A rough estimate would be 8/10 and one read because the end kind of does drag on even the berserker fight.