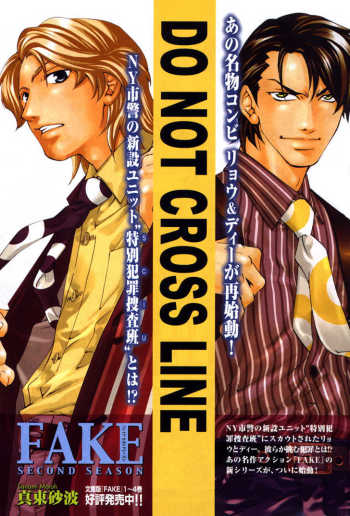 Yunogi has no working experience, but after being tricked into thinking he got a normal job out of luck, it turns out it's not so normal after all. Yunogi has to act as horror writer Kirino Shuusuke's dummy (i.e., stand-in).

Meet Renji Jumonji, outstanding police officer and commander of the Special Investigation Unit. His one regret in life? Neglecting Daisuke, who was orphaned when his father, Renji’s best friend, passed away. Thus, when Daisuke joins that very same unit, Renji vows to protect him at all costs. And protect him he must, from the roving hands of colleague Kamioka. But when it comes down to it, can Renji protect Daisuke from his own desires...? Renji's new-found life is full of hardship!

The turbulent relationship between a straight-laced newscaster and his eccentric weatherman.

Shitou Teruaki is a former top-notch bounty hunter who's been out of the business for a while and is currently struggling to get back in the game. He takes up a relatively low-paying mission to track down a serial rapist because of his desperate need for money, and is surprised when the currently 2nd-ranked bounty hunter -- the mysterious and assertive "K" -- appears to be competing with him for the prize. But when Shitou encounters local Ice Prince Ayatsuji Kaoru by "saving" him from the clutches of said rapist, the battle for being the #1 bounty hunter really starts to heat up...

This manga takes place a few years after the two lead males have graduated from high school. One of them came out in high school, and the other was a scary senpai who kind of took care of him. But now they meet at the same office, several years later, where the kouhai has yet to come out of the closet...

Three years ago, Yuusuke revealed to his family his preference of men. But after seeing their reaction, he ran away from home and has lost contact ever since. Now he has become a freeter, not knowing what to do with his life. Whilst shopping, he meets a man who loves riceballs. How will the power of the riceball change Yuusuke?

Seto Hayato was heartbroken and had a one-night stand with a guy he met at the gay bar. Only to reunite with the same man, Sakaguchi Shuuichi, when the police arrived because of Seto's report of his apartment being robbed. Both were happy about meeting and after another night of talking, the two realize that they want to become closer to one another.

See You at the Crosswalk

“You’re under arrest!” On his first official assignment, police officer Jinho thinks he catches a flasher... only it’s the suave school nurse, Hwanung! One chance encounter quickly develops into something more as Jinho finds himself both excited and flustered by Hwanung’s gestures of affection.