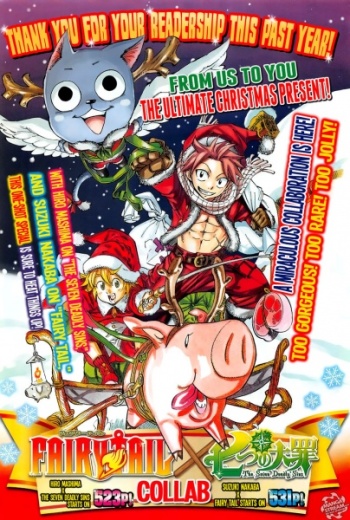 If you're looking for manga similar to Fairy Tail x The Seven Deadly Sins Christmas Special, you might like these titles.

Noel Christonbel is Santa Claus no. 29. He and his reindeer, Rudolf (in human form) visit children on Christmas day and give them presents - whatever they ask for. However, what happens when one of the children they meet doesn't want anything... and instead feels he should die?

Murikuri is the story of a popular pig, a pervert Santa Claus and his high school girlfriend, nice aliens and many more.

After Sena comes home from school one day, he finds a mysterious golden Nintendo DS lying in the middle of the floor. Deciding that it couldn’t hurt, he immediately begins playing Jump Super Stars only to be sucked into the game himself! As he literally drops into ‘Jump World’ he discovers that Dr. Mashirito has kidnapped a hostage and now, alongside the likes of Naruto, Luffy and even Bobobo bobo, Sena must try and rescue the helpless Mamori and find a way to return to the real world.