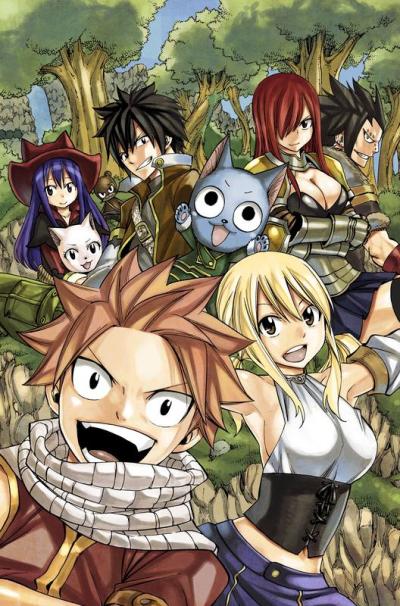 Shichiri Tasuke is an average teenager, who lives on his own while his archeologist father roams the globe searching for ancient artifacts. One day, Tasuke receives a package that contains one of these artifacts, and from it appears Shaorin: a guardian spirit charged with protecting the person who brings her forth. Shortly thereafter, a second artifact arrives which contains another spirit, Ruuan, whose job is to bring her master happiness. Unfortunately, Ruuan and Shaorin are old rivals and they cause no end of trouble while vying for Tasuke's attention.

Nodoka and Yue are reading a magic book from the library and come across a spell that shows the red string of fate of a person. One end is attached to the pinky finger of the person it was cast on, and the other end is tied to the pinky finger of their fated partner. Yue casts it on Nodoka and it turns out that the person on the other end of the string is none other than mage-turned-teacher Negi! Though elated at first, much to Nodoka's disappointment it turns out that the spell was just a prank, and the two of them aren't actually fated to be together. Until midnight Nodoka and Negi are stuck together, but Negi still has to take a bath so Nodoka has to tag along. Oh well, perhaps this experience will bring them closer together!

Tasuke is an ordinary schoolboy who is protected by two rivaling guardian spirits, Shaorin and Ruuan. When a third spirit named Kiryuu enters the fray with the apparent purpose of making Tasuke's life a living hell, it’s once again time for Tasuke to demonstrate how any problem in the world can be solved by being a generally nice -- if a bit wishy-washy -- guy. But Shaorin, whose world has been turned upside down, must now learn to cope with new and unfamiliar emotions, as well as discover the true meaning of love.

Negi Springfield and his gang of students, The White Wing, continue their search for Negi's father by planning a trip to the magic world. The series starts off with their arrival in London and their trip to Negi's hometown.

The class of 2-A is off to enjoy the sun and surf in an island vacation... but a careless comment by Negi has Asuna upset. How can Negi relax and enjoy the island paradise when Asuna won't even talk to him?! The other students can't bear to see their favorite teacher so glum and soon begin to take action; but will their attempts to intervene work, or just make things worse? Beach balls, bikinis, big breasts and magic abound!

In a world where magic is everything, Asta, who is the only person who can't use magic, and the magical genius Yuno go all out to become the Wizard King. This is a spin off of the anime series "Black Clover" with an unbelievable story and an amazing cast.