Failure Frame: I Became the Strongest and Annihilated Everything With Low-Level Spells - Reviews 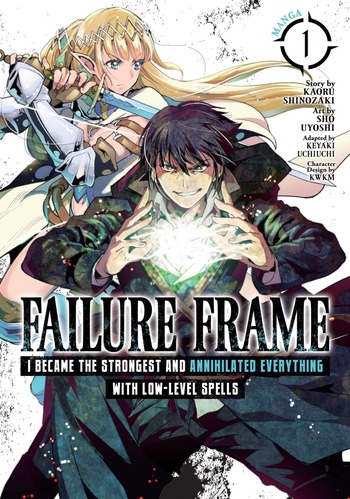 Seeing how it goes so far I can safely say that this is a good manga. Yeah sure you can go ahead and diss it because of the cliche plot but we all still come back reading it anyway. The mc is cunning and even if he is given op powers they don't feel too op. He has to use his brain to trick others in order to win. He has to put in effort and not just think hard about winning.

Frankly when I saw the cover art I didn't even want to read it because 99% of manga who put a female on the cover despite having a male mc are trash trying to appeal to a certain part of the community. But everything just feels organic. Even his first interaction with her is perfect, nothing feels too forced or cringe, they both act like adult. It's refreshing. We are used to see 14yo gets isekai'd and every character they meet has the same mental age.

Both of them have trust issues so seeing them interact awkwardly with each other is funny. It's like two animals testing each other. I just love the pace and the feel of that manga. I saw someone somewhere say that the novel is more interesting so I might give it a try. As for the manga it's a good read.

The prologue of the manga is terrible, the chars are mostly lame and unrealistic, the Goddess is clearly a crook but most don't care and the normal school kids couldn't care less about a companion being killed for no reason., It's reminiscent of "Dungeon Seeker" and such stories, and feels like a story written by a misanthropic lame guy that was bullied as a kid and has a shitty family, thus ends up hating his classmates, blamed society for whatever BS he went through in his life and dreamed of childish and self serving instant gratification crap to take revenge on those who slighted him and even society. Correspondingly, the author shows a lack of understanding of human relations and psychology with how cartoonish characters are.
That might be enough for many to drop this there, yet surprisingly, the tune changes after the 1st dungeon, the MC drops his hatred monologues and self pitty (mostly) and while it ain't an amazing manga by any means, it's perfectly readable, the MC still has some serious issues but is mostly normal and follows the law of Talion both for kindness and retribution. The villains are still caricatures but overall it's an ok story to kill some time and if it keeps improving it might even be an enjoyable read, so far it's been half very bad and half decent. Unfortunately, it's a monthly release, so it will take years before there's enough material to incline the balance one way or another.
As for the art, it's good, but it suffers the same surrealistic/cartoonish aspects as the story and characters. Some may like that, like villainous faces with deformed grins, but I find them off putting.

Story is okay its follows the lines of the manga dungeon seeker. The art is not what you expect when you look at the front cover but its still decent. Like I said earlier this manga is very close to the dungeon seeker in terms of how the protaginst got his power. I know this is a short review but there is nothing really spectacular about the manga. I gave this a 5 star because of the light novel. Do keep in mind if you do read this don't just write a bad review just because you don't like it actually give and in depth review on why or why you don't like it.