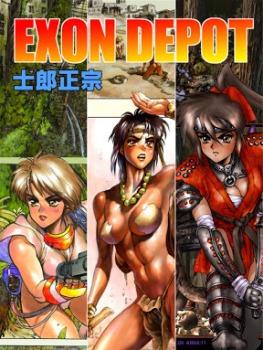 In Search of the Blue Sky

This is the story of the future a little bit ahead. The Japanese representative robot, demonstrated at the venue of The International Giant Robot Exhibition in Odaiba, goes out of control due to an unknown cause and destroys buildings around the venue. The police and Japan Self-Defence force cannot stop the robot, and the American and Russian robots are sent out to save the situation along with the request from Japanese government and the exhibition association office. However, because of the horrible power of the Japanese robot, a fight has begun between them. They fire missiles and shoot energy beam, which should not be loaded, and the area around the venue becomes a battle field. The UK, Chinese and German robots become victims of the circumstance and jump into the battle. The situation gets into a battle royal. Who will be a survivor?

In a post-apocalyptic wasteland, a scruffy man wanders the desert in his junky car. In this world, anything desired can be attained by pushing buttons on a special kind of vending machine. The man is able to get new clothes, a snappy new car, water galore, new "pets" to accompany him on his journey, and even an unusual hair cut; but all he really wants is the most important thing of all: a new Earth…

The movie begins with the scene in which a group of Stormtroopers is marching, and continues with other scenes for instance when protagonist Rey meets BB-8, then confronts Kylo Ren - who intends to fulfil the legacy of Darth Vader - waking up the Force, when Rey meets Luke SkyWalker, a legendary Jedi; and depicts the whole film series.