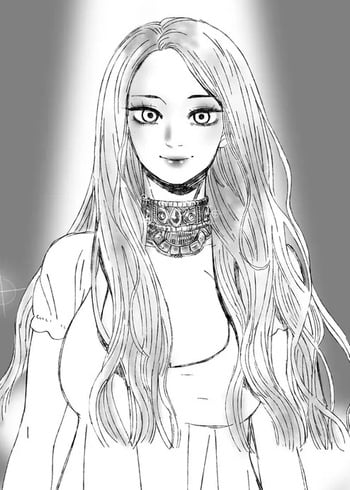 A Compendium of Ghosts

Sang, once the little boy too afraid to jump into the lake with the older children, comes back home a brave new man – a huntsman, to be exact. It's only after reuniting with his friend Sejin, the shaman’s daughter, that he notices a black shadow has been following him... The experience reminds him that there are spirits that walk amongst us, and not always in the dark.

Let Me Hold Your Hand

I have the powers to sleep with any woman if I hold their hands, but why don't I wanna hold hers?

High school is shaping up to be much different than what Young had imagined. First of all, the girls and boys are in separate buildings, which means Young’s got zero chance of casually running into her handsome, dreamy, kind, sexy, gorgeous crush, Bitna. Second, there’s a psycho chick in Young’s class…that no one else knows about! And to make things worse, she is Bitna’s dream girl. Young must find a way to get back at psycho chick and win Bitna’s heart…but luck is not on her side and things quickly spiral out of control.

Mix crow feathers, squirrel fur, and human hair together and voila, you end up with a fragrant decoction that erases memories. On Yeonjin’s third day as secretary at an oriental medicine clinic, she realizes that medicine made from hairy ingredients is just one of the many mysterious things about her new job. The clinic’s impressive clientele includes famous K-pop star, JD, who’s ordered the memory-erasing elixir after a tough breakup. An avid fan of JD’s, Yeonjin’s mind races with questions. Who was JD’s ex? Why does he want his memories erased? Will the medicine actually work?

All Eyes on Me

Kids Are All Right

This story tells you the value and importance of family; it will also remind you of the happiness and sadness, joys and sorrows of childhood.

Jaeha, an intelligent and great looking man, stumbles upon a never before seen beauty named Dami while working part-time as a nude model. As his obsession towards Dami increases, Jaeha's seemingly unblemished stature starts to crumble and the darkness within him begins to manifest.