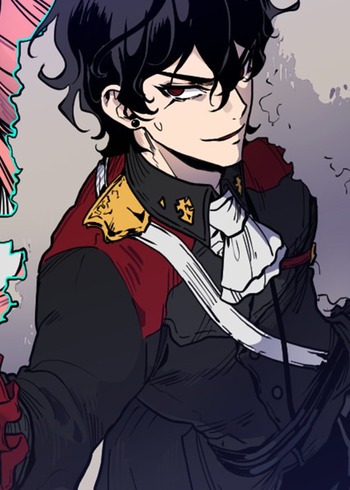 I had high hope for this series. I really did. The series starts off strong, introducing the characters and the premise of the story with some humor nicely incorporated. Then as the story progresses, the characters' backgrounds and their beliefs are revealed as the protagonist interacted with them, which makes him feel guilty of his motive for being there. All that build up to an exciting climax with much anticipation... Only for the ending that feels rushed without tying many loose ends. The series could have benefited greatly with an additional chapter or two as epilogues that briefly explain the paths/endings for all the major characters. Although the ending sort of wrap things up, it leaves many questions unanswered, and I feel for a series that starts out with so much potential to end like this is a pity.

The art and characters are probably the main highlight of this series. The art style kind of similar to Noblesse manhwa in terms of grungy style with muted colors and harsh shadow. And the character designs are beautiful. Each characters are very distinct in both their looks and background stories. I really enjoy learning about each characters and see their personal development as the story progresses.

And can we acknowledge hot how Merlin goes from being an uncertain older brother that only wants to find his brother to a hot daddy Demon King that cares and wants to protect his demon subjects? ( ͡° ͜ʖ ͡°)

Escape Devildom starts amazing and continues to be fairly interesting and entraining for most of the comic. Personally I don't care at all what the humans are up too, and didn't really enjoy their segments. There are a few too many characters, but they are all interesting, have reasons for being in the story, have defined arcs, and personalities. Character backgrounds felt a little shoe-horned in at moments, but that's easily forgivable.

The story itself is more comedic then I was expecting, but it was a nice surprise. I laughed quite a lot to myself as these demons got into all sorts of trouble. But the world is interesting and everything is explained well. The magic system has some lose rules, but it's not a huge part of the overall story.

Overall it's a great read, I disliked the ending, feeling it was too rushed and no-where near the happy ending I felt I deserved after reading 93 chapters, but that's a personal opinion and I won't rant here because *spoilers*. If you are a fan of Fantasy-themed comedies and have a free weekend, then this is a pretty good read you will probably enjoy.

Honestly, in my many years of reading all sorts of manga from comedy to fantasy, I've never gotten so heavily invested in a manga in only a few chapters, then get so crushed by disappointment i had to re-activate my anime planet account to let out some steam in a review. I will start by saying that I am going to be very harsh on it solely for the wasted potential this webtoon has. The start is phenomenal with soo many interesting and like able characters and the overall story at the beginning kept me coming back for more, however mid way reading through the chapters is when i realized, I am getting played.

I will start with the STORY which I gave a very generous 6/10. This is only cause of the first quarter of the story do not get me wrong, I would have given it a strong 4. The beginning is filled with soo many interesting plot threads and secrets that made say to myself, ‘damn, I can’t wait to see how this turns out’ and before I knew it, I’ve already pushed 10 chapters in a blink of an eye, solely cause of how invested I got into the story. Sadly, my joy was short lived as I began to realize how often juicy plot points would be glossed over in favor of some humor which was not really all that. I honestly found myself laughing at how bad things got story wise rather than the actual jokes in the story. If you want to read a webtoon that perfectly does comedy along with a really juicy story, I recommend giving Survival Story of a Sword King in a Fantasy World a shot, it made me sincerely laughing out loud and gasping at story revels at the same time, plus the action is done way better, not that the action here was that bad. Mid-story was when things started going south for me, when said juicy plot threads where completely abandoned but the end was when I lost it. The ending was garbage with it being rushed beyond reason. It was heart-breaking I tell you. How I wish they took their time with it and avoided focusing on stories that do not contribute to the main story.

Next is ART. I gave it an 8 solely because I have seen better, like the Survival Story of a Sword King in a Fantasy World I recommended earlier, otherwise it would have been a 10 Lol.

Now to talk about the CHARACTERS which in my opinion was the best thing about this webtoon. They all well drawn, and it is quite easy to get invested in them. I loved the different characters it has, loved how they interacted with each other and what they brought into the story. And most importantly I loved the character development the characters had, how I wish the story developed with them. However, unsurprisingly the characters were not flawless with their philosophies or motives as to why they do what they do either just did not make sense or was not a convincingly strong enough motive. But they were not too bad.

P.S If the story deteriorate cause of the writers health or real life situations, my condolences, i do hope he/she gets though them fine and get to writing another webtoon although this time please take your time.