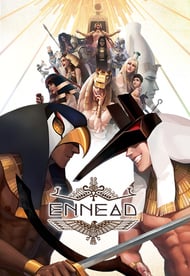 The once peaceful land of Egypt has been stained with blood under the tyrannical rule of Seth, the god of war. Horus, son of the god Isis but not yet one himself, rises to challenge the throne and put an end to the chaos and destruction. Although the confrontation between Seth and Horus began with hatred, in time it becomes blurred by obsession and desire...

Brilliant. I dare say this author is quite something. They managed to capture Egyptian mythology (an unpopular choice as compared to greek, Celtic, and Norse mythology) and they made it into a beautiful story that gives us a spicy peek into the lives of Egyptian gods with just the right amount of history-bending. I appreciate the fact (probably more than anything) that for the first time, we get the villain as a male lead. And I'm not talking 'arrogant CEO' or 'Mafia boss' cliche rubbish. I'm talking "I'd kill my brother for power" kinda villainy-- and not just as a bluff either. All in all, this webtoon isn't completely released yet but I see myself sticking around. What can I say? I'm sold.

Well-written, complex (in a good way) plot and characters, and beautiful art. Not for the weak hearted. Please don't go into this expecting romance. The yaoi and BL tag are perhaps somewhat misleading. Yes, there is sex between men - but it's not portrayed as romantic here. Yes, there's sexual tension between Seth and Horus, but as of chapter 68 I'm not sure that pairing would work out to be the most reasonable, considering the situations. There should be trigger warning for rape (the webtoon treats rape as a very serious subject). As with most mythologies, incest happens. Though most webtoons make the incest more subtle, like they try to change the family relations between characters, this is full-blown, unabashed incest - exactly like in Egyptian mythlogy. So if you can't stomach incest, turn away, turn away. Now, I hate reading incest too, but because the relations are adapted from mythology, I understand where they're coming from. Also, they're gods and goddesses, so I figured there would be some leeway for incest there.  The plot is pretty complex. Complex in a good way. I think it's better to binge-read this to fully absorb what's going on. The plot is, in my opinion, written well. And that goes for the characters as well. What I really love about this webtoon is that we're shown the different perspectives and motivations of each god. Nothing is entirely black or white, but patches of grey here and there. There are some plot twists that are actually unexpected but foreshadowed (that's some good writing there when it foreshadows and you expect something, and that something does happen but you're still surprised). There's plenty character development. We're shown thought processes and how characters came to a decision. I just felt really immersed in the webtoon. The art is gorgeous. Gorgeous. I love the art style - it really captures the Ancient Egyptian art feel - the colours and the way characters are drawn. I love the costumes and makeups. I love the way the artist played with the colours and frames of panels to fluidly tell the story. The artist draws in a way that keeps up the suspense. We don't often see the gods' face in the beginning chapters, and even later on. They're covered by their headdress most of the time, especially Horus, which gives a feeling of mystery and reverence.  I can't see how the Seth and Horus pairing would work yet, at chapter 68 as of this review. Honestly, I just don't see it right now. With the way things are going, the relationships are complex and a mess (purposely written by the webtoon as that) and the webtoon's still untangling the pieces of the story. So I have no clue what pairing, and I'm excited for the resolve. Another thing, and slight spoilers: I don't get why everyone's hating on Isis? She's obviously a victim too, and she made decisions in a whirlwind of suffering and emotions. Yes, the decision (curse) is now long-term and harms everyone in the curse, including her, and that is a bad decision (in our human eyes). But putting all the blame on her? That's too much. She does have her faults, and so does everyone in the story, some less than others, some a lot, lot more. She's a grey character. I recommend you read this if you want to think a bit while reading and read a highly interesting plot. This would definitely be for a more mature audience. Some more reviews that I feel describe the webtoon extremely well: https://myanimelist.net/manga/131827/Ennead/reviews https://tvtropes.org/pmwiki/reviews.php?target_group=Webcomic&target_title=Ennead https://tvtropes.org/pmwiki/pmwiki.php/Webcomic/Ennead

This is a story which will be especially loved by those who enjoy historical analogies mixed within the storyline.  Be warned though, the plot is built on Egyptian mythologies and contains incests, rape and torture. This is the story of Seth, the glorious God of War who is as terrifying as he is beautiful. The scary image he depicts is somewhat different from his true personality as we discover his past and what he went through.  Horus challenges Seth, his uncle, in order to purge Egypt from the tyrannical regime of Seth. However, his own desires for Seth soon overwhelms him and thus marks the beginning of his obssession. The pace of is well pitched against the plot as we witness the retribution of Seth at the hands of the other gods.  The art is simply amazing and gorgeous.  As for the romance, it is slow built, with enough tension to keep readers engaged throughout. 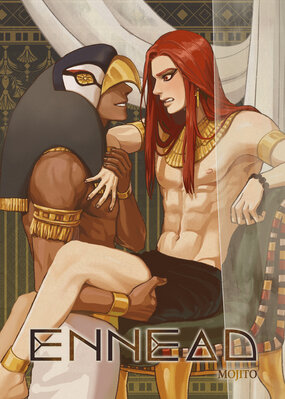